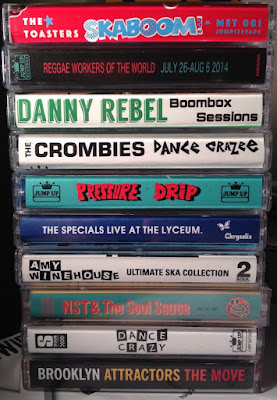 Saturday, October 8, 2016 is Cassette Store Day (see a list of participating stores here) and Jump Up Records is releasing a slew of really interesting titles to help celebrate the recent resurgence of this format (and I'll be damned if I haven't started collecting cassettes again--just last week I picked up used copies of The Scofflaws debut on Moon, as well as Derrick Morgan's Tougher Than Tough and The Deltones' Oddball Boy, both of which were licensed to ROIR by Unicorn Records; and I've also fed my cassette collecting beast by mail ordering some great new cassettes from Jump Up, such as The Crombies Dance Crazee, The Specialized Dance Crazy comp, The Brooklyn Attractors' The Move, NST and The Soul Sauce's Heaven is Here/Song for Rico, and The Specials Live at the Lyceum).

The Toasters Skaboom: This is first time this classic and hugely influential American ska album has been re-issued on cassette (with cool, reworked artwork) since Skaloid/Moving Target/Celluloid originally released it in 1987.

King Stitt Cool and Copasetic Selector Set: Recorded live in 2002 at the Legend of Ska concerts in Toronto, Canada, this set features Stitt chatting over foundational ska riddims with Ska Nick The Trojan at the controls.

Danny Rebel Boombox Sessions: Re-released for CSD, this is rough and ready acoustic reggae (for fans of Chris Murray, Bob Marley, and Toots and Maytals) recorded live and direct to an old boombox by Canadian Danny Rebel.

Rude Guest Lost Chicago Ska 1982-1993: This Chi-town band kept 2 Tone ska alive in the USA in the 80s and this release compiles all 16 songs they recorded and issued on a series of limited-edition cassettes back in the day.

Various Artists Soundclash Volume 1: This is a collection of Indonesian ska imported from Jakarta that features three of that scene's top bands--D”Jenks, James Steady, and The Ska Banton--playing traditional jazz ska, skinhead reggae, and modern ska!

All of the aforementioned titles can be found at participating CSD retailers or pre-ordered from Jump Up.

Also, if you're in the Chicago area on Saturday, October 8, 2016, be sure to check out this really extraordinary Jump Up Cassette Store Day event at Logan Hardware Records from 11:00 am to 7:00 pm with acoustic performances from Vic Ruggiero and Jesse Wagner, and King Tony, a live cassette DJ set with Chuck Wren, a CHema Skandal poster exhibition and cassette painting(!), plus Ska Brewing tasting and Dark Matter coffee!