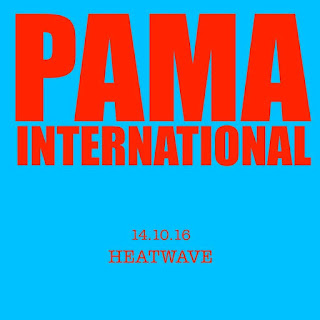 After taking a seven-year break to work on other projects, Pama International is back on the beat with a new single (a fantastic, grooving reggae cover of Martha and the Vandella's "Heatwave" featuring Pama Intl's extraordinary vocalists Jewels Vass and Anna Uhuru, to be released digitally on October 14, 2016), a new album (Love and Austerity on Cherry Red Records/Happy People, to be released digitally and on vinyl in January of 2017--all tracks produced by Pama Intl songwriter/founder Sean Flowerdew and guitarist Lenny Bignell), and are playing upcoming shows with Zion Train, King Prawn, Dennis Bovell (!), Don Letts (!), Misty In Roots (!), and a UK tour with a recently reanimated punky-ska'n'reggae The Dead 60s (see "Ghostfaced Killer")!

Based on what I'm hearing on "Heatwave," we're in for lots more incredible music from Pama Intl in the months ahead. If you're in the UK, make sure to catch one of their upcoming shows...