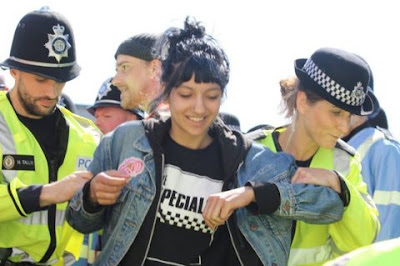 As we edge ever closer to the release date of The Specials' Encore (out on February 1, 2019 on CD and LP from UMC), the band is previewing a remarkable second song from the album, a response of sorts to Prince Buster's over the top and wildly misogynistic (so much so that you think it has to be parody, though many would miss the distinction) "Ten Commandments," which was released and re-issued several times from 1963 to 1967. While The Specials' track shares the same title as Prince Buster's song, it's not a cover with new lyrics. The Specials' version is a spoken-word answer record to Buster's original with a new instrumental track beneath it (that opens with a similar drum roll) and features Saffiyah Khan listing her version of the commandments from a feminist perspective.

Khan, of course, became a potent symbol of progressive resistance when she was participating in a counter-demonstration against the racist, right-wing, and Islamophobic English Defence League in Birmingham on April 10, 2017 and was photographed smiling and relaxed as EDL leader Ian Crossland was angrily in her face after she intervened to stop a number of EDL goons from harassing a fellow counterprotester who was wearing a hijab. Khan's popularity rose even further in certain circles when photographs of her from different angles revealed she was wearing a Specials t-shirt to the counter-demonstration--which led to her being invited by the band to pen the lyrics for and perform on this recording.

This is not the first answer record to Buster's "Ten Commandments." Buster himself released “Ten Commandments (From Woman to Man)” featuring Princess Buster in 1967, which pushed back hard--for the 1960s and within the confines of marriage--against Buster's sexism ("Commandment One: Thou shall have no other woman but me. Two: Thou shall not provoke me to anger or thou will have no peace at night..."). Khan's commandments, listed below, powerfully and unequivocally refute all of the limitations and expectations that our patriarchal and chauvinist society would impose on her body and volition, solely on the basis of her gender. Her assured declarations of independence and take no prisoners support for women's rights are thrilling to behold. Yet, it's incredibly depressing to realize how little has changed at a societal level--these same ugly and pernicious attitudes towards women were prevalent when The Specials debuted four decades ago. In fact, apart from the references to femi-nazis, femoids, the internet, and YouTube, these spoken word lyrics could have been written back in 1979. Khan and The Specials remain true to 2 Tone's ethos, it's the world that never quite got the message.

The Specials back Khan with an orderly, brisk reggae skank that emphasizes the rock solid bass line (Khan says it's from Dawn Penn's "No No No"), but never distracts the listener's focus from her spoken word lyrics. But on the periphery of the entire song there are swirling, dubby synth effects and during interludes between the verses, there are descending, minor-key violin lines--all suggesting a lurking danger and barely contained chaos, like the bottom could fall out at any moment. It's as if Khan's thoughts, will, and voice keep the demons at bay; but in their absence, a terrible darkness seeks to fill the void.

The commandments of I, Saffiyah Khan
Thou shall not listen to Prince Buster
Or any other man offering kindly advice in matters of my own conduct

Thou may catcall me on the street
But thou should take note that I'll catcall you right back
To tell you that you look pretty sexy, too, in your joggers, or your suit, or your newfound look of confusion

Girls should not turn on each other or use man-made ideals like pars
Don't you realize you're only making a fool of yourself when you ask, "why don't you wear make-up?"
Is that what it takes to impress a bloke whose brain is made up of promises of curvy size zeros and anti-gravity tits

Thou shall not tell a girl she deserved it because her skirt was too short
She walks home, streetlights illuminating her as a target
But she started it because she looked at him
And he finished it because he wanted to
And they'll bring out her skirt as Exhibit A before the judge

The commandments of I, Saffiyah Khan

This is a profound and affecting track that makes its points spectacularly well. Bravo to all involved.

The first track The Specials previewed off Encore was "Vote for Me," which we reviewed in December.

Update (1/24/19): Make sure to read this really excellent article about The Specials (which Lynval Golding and Saffiyah Khan were interviewed for) in Billboard by Ken Partridge.

Great write-up of "10 Commandments." I had the chance to interview Saffiyah Khan and Lynval Golding for a Billboard story about the new album. Thought I'd pass along the link in case you're interested: https://www.billboard.com/articles/columns/rock/8494013/the-specials-reunion-album-saffiyah-khan

Keep up the great work, Steve. Duff Guide to Ska is one of the few sites I visit every day that doesn't totally bum me out with bad news!

Thanks so much for your kind words!

I did read your Billboard article earlier this week--it was fantastic! Congrats on that! (There's actually a link to it in the post, but I didn't highlight it; I think I'll add an update about it at the bottom that's more prominent.)

There's so much awful news out there; glad that The Duff Guide to Ska is one of your bright spots each day!

Thanks! I'm so glad you dug it.