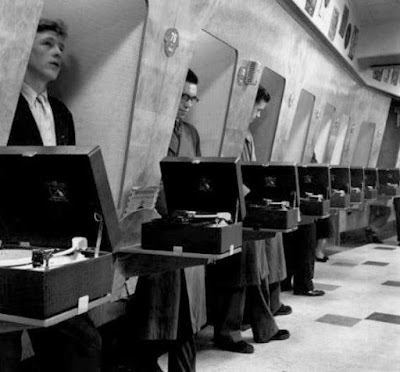 Napoleon Solo Open Channel D (LP, Jump Up Records/Pork Pie, 2018): This terrific Danish band formed in the wake of 2 Tone and was a vital part of brilliant late '80s UK/Euro ska scene (The Trojans, Laurel Aitken, Bad Manners, Potato 5, The Loafers, The Deltones, The Busters, The Frits, and more). Anyone familiar with and a fan of Napoleon Solo's previous releases (their essential How To Steal the World EP was produced by Buster Bloodvessel and their great soul-ska debut album Shot! was released on Buster's short-lived Blue Beat Records) will definitely want to pick up their new one, as they've only gotten better with time. Open Channel D is packed with powerhouse, hook-filled 2 Tone tracks--two of the best ones are proper studio recordings of demos from 1984 that only recently saw the light of day on Jump Up's Early Recordings: First Demos 1984/1984 (proving that a great song in 1984 is still a great song in 2018!). Top cuts include the cocky, I-don't-give-a-damn-what-you-think mission statement in "All I Need" ("I want to live my life/Just the way that I do/I want to get my kicks/Until I'm black and blue/I don't say my life's complete/But it's all I need"); desperately seeking human contact and a cure for intense loneliness via a telephone chat line (anyone remember those from the 1980s?) in "0059" ("Somebody talk, somebody answer me/Somebody please make me feel alive"); and the ecstatic feeling of being head over heels in love and wanting everyone to know how how good you have it in the swaggering "See Her." Even though it was written when they were young pups back in '84, the upbeat but bittersweet "Nobody Told Me" contains the hard-won wisdom of the middle-aged that only comes through living your own life (that often doesn't work anywhere near where you anticipated): "Nobody told me life is like this/Always saying goodbye/Nobody told me life is like this/Always wondering why/Well, you start somewhere and you'll end somewhere/And in between you just go/Nobody told me life's like this/But now I know." It's a "Once in a Lifetime" for the ska set.

The Trojans Top Hits (CD, Gaz's Rockin' Records/Cadiz Music, 2018): This 18-track compilation offers a completely stellar overview of The Trojans' extensive catalogue. (For some key background info on amazing The Trojans and their fearless leader Gaz Mayall, see The Duff Guide to Ska review of the book "Gaz's Rockin' Blues: The First 30 Years.") Top Hits contains songs from 1987 (their first single "Ringo") through 2013 (their most recent LP, Smash It) released on seven Trojans albums, plus several 45 and 12" singles--and there is extraordinary high-quality control throughout (actually, when I was looking over all of their releases, I kept spying many additional tracks that should have been included here; this easily could have been a double or triple album). Guest musicians on some of these tracks include Gaz's friend Prince Buster, Rico Rodriguez, Jennie Bellestar (on one of my favorite songs "Mixed Feelings"), and Zoe Devlin Love. Gaz provides extensive liner notes (that are focused mainly on all of the musicians that comprised the three iterations of the band). If you're not acquainted with The Trojans' sound, its traditional '60s ska mixed with heavy doses of reggae, Japanese, and Celtic music (and the lyrics of theirs songs are often very eco-minded). All in all, this is a fantastic intro to/survey of this exceptional band.

And there will be several more 2018 releases reviewed in Part 3 TK!