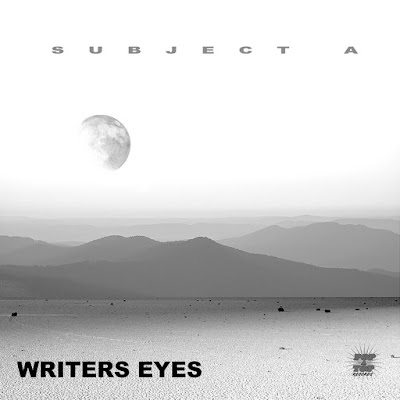 Writers Eyes is the stellar second studio album from Subject A and one of the most wonderfully and fearlessly unique records that I've heard in some time (Subject A is a collection of terrifically gifted musicians assembled by producers/songwriters/musicians Dean Sartain and Erin Bardwell; their debut was 2016's Sleepwalkers). The sometimes genre-defying songs combine elements of ska, reggae, dub, jazz, no wave, and soul, and often include orchestral-like string backing. The fantastic resulting album is highly evocative, full of atmospheric soundscapes and cinematic visions that exists somewhere in the realm of The Specials' More Specials, The Special AKA's In the Studio, Massive Attack vs. Mad Professor's No Protection, Megative's debut, and Rhoda Dakar's Lotek Four releases.

The great title ska track features The Selecter's Neol Davies and his signature and instantly recognizable guitar work, and it's about how books (plus human beings' incredible capacity to imagine and empathize) can manifest current/past and oftentimes ugly truths, change our minds, and transport us to times and places and people accessible only through the lens of the authors and their written word. The other cuts immediately accessible to ska fans (think singers from The Go-Go's or Bananarama backed by The Specials, plus Rico and Dick Cuthell) include "Nite Life" (where the non-work hours are now spent in conspicuous consumption at the mall--"Go find that store/Go buy some more"--instead of the pursuit of a good time, nite klubbing at the Locarno) and the rambling "Road Trip" taken to break routines and habits.

On the reggae tip, "Hide Your Face" is an insistent yet wounded-sounding track, where the singer's unwilling to accept the ghosting from her partner ("You really cannot hide/All my dreams are gone/I'll find you/I'll find you/We were meant to be together"). There's also the two-versions of the same song that emphasize the different perspectives of the song's lyrics--the jazzier and remorseful "It's True" is about a relationship that's over ("First time I laid eyes on you/Thought you were the only one") and the rootsier "Rising Tide," which underscores the cyclical nature of everything in creation ("Rising tide falls into seasons/But it still remains the same"). Beginnings are always eventually followed by endings.

The magnificent, eco-minded "Vega's Strings" features a reggae bass line and percussion, jazz trumpet, slightly off piano line, and synth-like violins to create a track full of tension and uneasy beauty--appropriate for a song decrying how humans are filling the water and land with never-decomposing plastic waste on a massive scale, with the reminder that "we're not the only creatures on the land." As well, the wondrous, almost ethereal "The Earth Still Turns While You Sleep" is the sound of the universe going about its business as it always does; we're not its master by any means, but should always take a moment to appreciate its daily splendor (see album closer "Penhill Sunrise").

Writers Eyes is one of the more sophisticated, daring and rewarding ska/reggae albums you're likely to encounter. Don't miss it!