As many of you are aware, July 28, 2009 marks the 30th anniversary of the release of The Specials' debut single "Gangsters" (actually the title of the single was "The Special AKA Gangsters vs. The Selecter" with "Gangsters" on side A and "The Selecter" by The Selecter, really guitarist Neol Davis, trombonist Barry Jones, and Specials drummer John Bradbury, on the flip side)--a momentous date in history for any fan of 2 Tone, third, or fourth wave ska.

Duff Guide to Ska reader John V. was kind and cool enough to forward the following press clippings from back in the day, including a feature piece in Time Magazine from April 1980, a review of "Gangsters" from Melody Maker published in May 1979, and an ad for band ties that ran in the NME. Do you think I can still order ones from The Clash and The Specials? I'm always a sucker for band merchandise. (Click on the articles for larger images.)

Don't forget to check out their live performance of "Gangsters" on SNL at the bottom. It's smokin'! 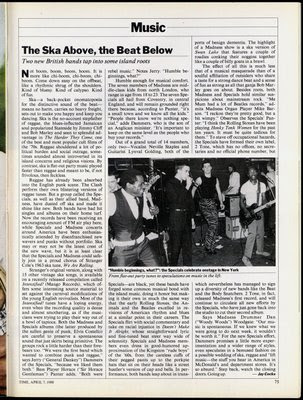 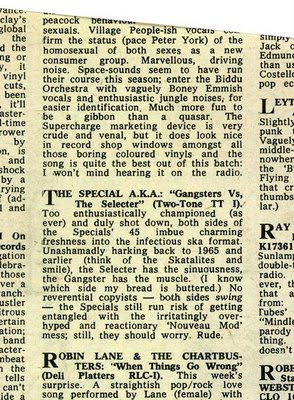 The Specials appeared on Saturday Night Live on April 19, 1980 (in addition to "Gangsters," they performed "Too Much Too Young").
Posted by Steve from Moon at 10:47 PM

Email ThisBlogThis!Share to TwitterShare to FacebookShare to Pinterest
Labels: 2 Tone, Madness, The Selecter, The Specials

I had no idea the Specials were ever on Saturday night live, how cool is that! It will be interesting to see what telly they do for their reunion!
Andrew Culture

Nice clip I had no idea. One of my most treasured records is the original Specials vs Selecter single. Its from the original pressing run, prior to them getting major distribution.

Thanks for the comments. I knew about The Specials' SNL appearance, but was surprised that I was able to find it on YouTube.

I wish I had seen it when it was originally broadcast--it would have blown my mind. I was about 13 at the time and just beginning to get into New Wave, but The Specials weren't on my radar just yet...

I'm sure most Americans had no idea what to make of these British upstarts. But if you were open to new music, it must have been life-altering.

I would love to get my hands on a Specials/Walt Jabasco 2 tone tie!
BTW, I dig very much that SNL performance. Reminds me of another memorable SNL performance...the Clash performing Rock the Casbah. I remember catching it back when comedy central still aired old SNL eps. Mick Jones actually played one of those hand held video games that was sampled on that song while on stage. He put it up to the microphone during the performance. So odd for that time. Classic.