Duff Review: The Crombies "Blood and Fire" b/w "Mad at the World" 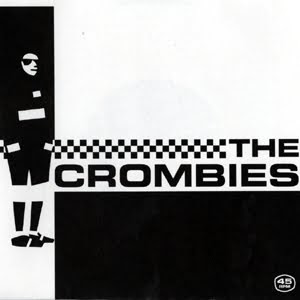 Chicago's 2 Tone-worshipping band The Crombies (fearlessly led by Mike Park, formerly of Deal's Gone Bad and Lord Mike's Dirty Calypsonians) party like it's 1979 and the past 30-odd years never happened (God knows there are probably vast stretches in there that we'd all like to forget!). While they are obviously 2 Tone fanatics, The Crombies are also huge supporters of the Chicago Fire Soccer Club, which is the reason why Walt Jabsco is decked out in a Fire kit. (While Park was in Deal's Gone Bad, they also wrote and recorded the song that is still played after every Fire goal.)

Side A of The Crombies' debut single contains Niney the Observer's dread apocalyptic/spliff-sparking classic "Blood & Fire" re-fashioned as if covered by a Too Much Pressure-era Selecter (and the results are knees-up fantastic). The flip is "Mad at the World," an old Mike Park-penned DGB tune from the late 90s that is run through the 2 Tone converter--and I have to say I much prefer this version to the original.

The Crombies have a long-player coming out this fall (on LP, CD, and cassette, even)--and, from listening to this, it promises to be a real stormer!

To stream The Crombies' "Blood and Fire," go to the Jump Up website and click on the track on the label's player.
Posted by Steve from Moon at 12:01 AM