From a recent article in The New York Times:

"About 95 percent of music downloads in 2010 were unlicensed and illegal, with no money flowing back to artists, songwriters or record producers, according to Alex Jacob, a spokesman for the International Federation of the Phonographic Industry."

I have to admit to being completely bummed out after I came across that paragraph in The Times. How can bands and labels--particularly those on the underground scene--ever hope to survive (let alone thrive) if they can't expect to even cover their expenses? Why should they ever bother to go through the huge effort to put out recorded music if they're just going to be ripped off by the "fans"? (As many of you know, I'm old school and believe that people should actually purchase recorded music--and have written extensively about the evils of illegal file sharing here, here, and here.)

But then I came across the picture below today and it makes me think that everything will be alright! The music fanatics like Jason Lawless (and many others) will always find a way to keep things going! 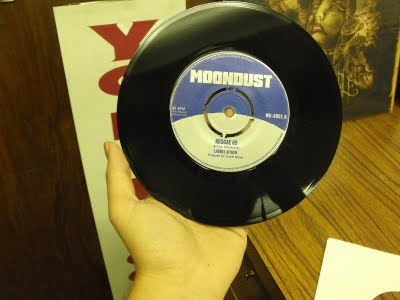 This photo is from the pressing plant where the first Moondust Records release is being readied from the late and absolutely great Laurel Aitken: "Reggae 69" b/w "Big Fight in Hell Stadium." I'm a member of Reggae 69 Fan Club, which funded this project through Kickstarter--yes, a whole bunch of us ska and reggae fanatics got together and put up our money in order to make a whole series of 7" releases happen. So, I'll be receiving one of these sweet babies in the mail soon! (Get in touch with Jason to find out how you can join, too!)

Perhaps this is really the only feasible way forward for the independent side of the music industry--the new (and somewhat awkward and unorthodox) model for selling recorded music: the fans have to become investors in a project before it can be put into production and fully realized. It may be the only means for recorded music to re-acquire value and significance in the digital era. Collectively, we have to pay in advance, in terms of both cold hard cash and an unshakable trust that the band will make the most of our faith in them and create some amazing music. It's sort of a Darwinian way approach to making records and CDs--only the strong will survive to reproduce. But I suppose it's much more preferable than the slow slide into oblivion. (Really, the future is now: I've already helped to sponsor Portland, OR's new ska/rocksteady act The Sentiments in their effort to record and release two 7" singles...)

Is this the only way back from the brink for all of us?
Posted by Steve from Moon at 12:22 AM

I don't know about others, but and a few of my friends both file share and legally buy music. We restrict our file sharing to bands who we feel don't need the album sales to get by any more (the blink-182s types). When it comes to smaller bands like those you're worried about, we always shell out what money we have to support those guys

Thanks, Collin! Glad you and your friends are supporting the indie bands. They really need it and appreciate it!

As for the bigger bands, it might be more ethical for one of you to buy the CD or purchase a digital download of it and then share it with your small group of friends--it is the old school equivalent of making a cassette tape of an album for a a buddy or two (and copyright laws have always made an allowance for this--it's legal to burn a CD or two and give them out to people you know).

WOW! While I am sincerely flattered that you use my little project as an example of how to keep music viable in today's market it freaks me out too! That's a lot of pressure! hahah I really do appreciate the piece though! Thanks.

The point you make about believing and supporting on faith is key. I've long talked to bands about finding their fanbase and making sure they connect and foster that first and foremost. That is what will either make or break their band. Know your fans and make sure they know you. That's the point of this project. This is for the collectors, the vinyl junkies (which I have tattooed on my arm), the hardcore early Ska and Reggae fans and for me. If I didn't sell any I'd still be happy I did it (although please buy the records! There are more to be made).

I like to hold the vinyl and play it. It's for a specific market, a certain type of person that likes to still read books and zines (me included), who appreciate the information on the label even.

Maybe there will be a digital release down the road but we took care of the hardcore supporters first - they are the ones that will be here when the digital pirates have moved onto the next big thing.