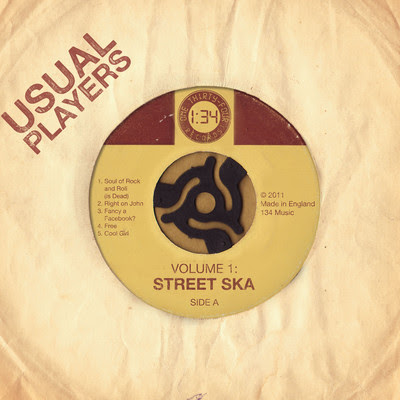 North London band the Usual Players produce a spirited brand of spiky post-2 Tone ska that could be best described as what you'd hear if Dick Lucas of Citizen Fish were ever to front The Toasters. (Yes, Usual Players singer Lewis Norton's voice is strikingly similar to Lucas'--compare this Citizen Fish track to one of the UP's tracks below). As the album's title might suggest (and the singer's working class accent re-affirms), the world perspective presented here is that of the average man in the street--but the kicker is that all the lyrics here essentially relate to having lived long enough and been let down so often that you've become completely disappointed by life.

Songs on Street Ska include those about being totally uninspired by corporatized, rebellion-free modern rock ("The Soul of Rock and Roll (is Dead)"); guiltily trolling for semi-anonymous sexual liaisons on Facebook ("Fancy a Facebook"--a new crude phrase for the digital age!); dysfunctional relationships with the opposite sex ("Free" and the stuck-in-my head "Cool Girl"); disgust at a political system that only rewards the powerful and rich ("Right on John"); a tale about an immigrant from Italy who pays her way through prostitution (the reggay-ish "Santa Maria"); and struggling to find an escape from the boredom and monotony of school and work, but finding yourself trapped in the same old same old and being painfully aware of your life slipping away ("Bad Pills," So Whatford"). Despite all the cynicism, disillusionment, and bleakness on display here, it's not all grim. There is much wit and humor to be found in the Usual Players' lyrics (from "Tatt's Too Bad": "Hooligans with Buddha on their arms/but they can't even tell you what religion reads the Qur'an")--plus it doesn't hurt that the songs are get-up-on-your-feet catchy!

In "Right on John," Norton's sung criticism of "how things are" is pretty sharp and furious (but not off the mark): "We like to keep the dog well fed/by keeping half the Third World dead/Fueling our homes and our cars/by the means of illegitimate wars/There's no such thing as climate change/just another one of their controlling aims/Using fear as a way of tax/to keep us on the straight, narrow tracks." But then later in the song, he deflates any trace of self-righteous Bono/St. Bob pomposity by stating, "Don't you just hate the song/when politics are spoken by some musician/It's not that you disagree with the opinion/It's just lame/I know I should do more, join a march/or rally for some cause/But that just seems long/So for now I'll protest in this song." He's got something to say, and the platform to share it...but feels that it's unlikely to change anything (though Billy Bragg might want a word with you, boys).

But what seems to truly raise the hackles of the Usual Players is how all of the obligations and responsibilities that come with adulthood eventually corrupt and grind you down--so that complacency sets in, you make all sorts of moral compromises, and forgo your dreams of greatness for something much less. In "So Whatford," Norton can barely choke back the bile as he blisteringly sings: "Spend your days in the same jobs/Spend your nights in the same pubs/Forty pound for cocaine, that's a shame, mate/You've been taken for a mug/You're poncing money off the government/Exclaiming it's to be your entitlement/You blame everything on immigration/And you call yourselves honest men...No ambition/Just repetition/This is the story and this is the mission/Calling all town rats and estate cats/Your life is over/That's a fact." (Guess it should be mentioned here that the exact town the band is from is Whatford--so this barbed attack is on their own.)

Yet there's a way out and he's taking it (and wouldn't mind it if you'd join him): "Council estate boy that is me/I'm from a place called South Oxhey/Forget what I'm told, I get a bit bold/It's a massive world out here you see...I've got ambition/I hate repetition /This is my story and my mission/Calling all town rats and estate cats/Time to kick off and react...Just stand up and fight it/Shake your heads and reject it/Go take everything/No matter what it costs/Be more than just Whatford."

So the Usual Player's story is that our way of life sucks and just about everyone you know is going to let you down--but their mission is not to surrender. These are rebel songs to see you fight another day in the Age of Austerity...

Usual Players - So Whatford - One Thirty Four Records by Usual Players
Posted by Steve from Moon at 12:28 AM