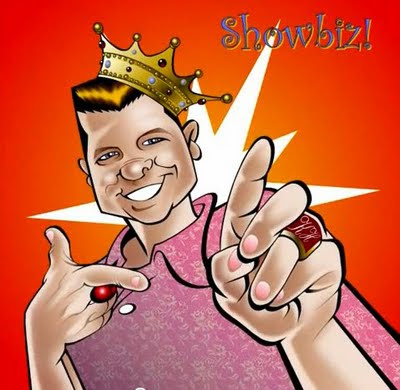 Like The Ruts' "Staring at the Rude Boys" and Ted Leo and the Pharmacist's "Where Have All the Rude Boys Gone?", King Hammond's "Where Have All the Rude Boys Gone?"--the lead track off his excellent new album Showbiz--is yet another song about rudies that, ironically, isn't actually a ska song itself (in this case, it's New Wave-y rock). The King laments the disappearance of rude boys from what passes for the ska scene these days--but he understands that there may be extenuating circumstances: "Maybe life's just led them away/to mortgages and bills to pay/Now there's different clothes to score/and the suit don't fit no more." His call to action is, of course, "Bring back the rude boys!/Stay rude, stay rebel!"--the latter part of this refrain is a nod to No Sports' incredible track of the same name from the early 1990s. (For all of us keeping the faith, hopefully someday soon we'll all be singing a tune like this in response.) While there may never be a resurgence in the popularity of ska and rude boy fashion to rival the heady days of 2 Tone, King Hammond continues to pump out an ever-expanding catalogue of splendid ska and skinhead reggae tracks to keep the current crop of ska fans and middle-aged hold-outs happy for years to come. (Graying hold-outs might also appreciate the fact that the album's cover illustration is by Steve Friel, who is probably best known for his work for Unicorn Records.)

Since the entertainment business is all about captivating audiences with stories and songs about conflict (and its resolution), it's fitting that more than half of the songs on Showbiz relate to one of the strongest and thorniest human emotions--desire--and what it can drive us to do (all you armchair psychologists can now break out your Complete Psychological Works of Sigmund Freud). The sweet, lilting early reggae of "Easy Lovin'" underpins a tale about wanting to win back a lady who gave him "easy lovin'/like a 1-2-3" (whether this means that he's missing how their love was uncomplicated or simply the good sex they once had is up to the mind of the listener). "Heart and Soul" bubbles along like reggae popcorn, but is much darker lyrically and may remind one of the tragic pop songs ("splatter platters") of the 1950s and 1960s (see Mark Dinning's "Teen Angel," Roy Orbison's "Leah," The Shangri-las' "I Can Never Go Home Anymore"). In this case, the singer peers down at his soul mate ("I love you baby/with my heart and soul") in her coffin (or grave) and sings, "Now that you're gone/it means the end for me."

The spectacular skinhead reggae found in "X-Rated" is "enhanced" by some pretty explicit--and dare I say stimulating--sounds and words (this one's definitely NSFW), but by the end you'll see that it's all in good fun (obviously this is another homage to the naughty rude reggae cuts from the late 60s, like Lloyd Charmers' "Birth Control," Prince Buster's "Rough Rider," or Laurel Aitken's "The Rise and Fall of Laurel Aitken," amongst many, many others). It's all about wanting to do the dirty deed and maybe not quite getting there (spirit willing, flesh weak type of thing).

While there is a reference to something "seven inches long" on "Vinyl Junkie" (King Hammond really does relish his double-entendres), this one's all about the addiction to vinyl: "When I was a young boy, I used to play my songs/on something black and shiny, and seven inches long/The only needle that I used was going round and round/on the dansette record player with a hypnotizing sound...I'm a junkie!/A vinyl junkie/So gimme a fix today!" Even girls can't quite compare to music: he dumps his girlfriend after she writes her name on the label of a Roxy Music single (the defaced single in question is "Virginia Plain"). "Rockin' on Ridley Road" is a propulsive dirty reggae mash note to the local Orange Street of King Hammond's youth, the West Indian market where he went "to get my soul and reggay" and came into contact with diverse peoples, cultures, and foods from the Empire's former colonies (Sammy Buzz toasts, "As I was sayin'/Asian, African, and Jamaican come together in Ridley Road/Curried goat, swordfish, ackee, and yellow yam/You can get them in Ridley Road"). Without reading a sociology paper on the subject, you can easily discern from this song how the seeds of multiculturalism germinated in KH's generation of 2 Tone Brits.

The King's tribute to Prince Buster, "Voice of the People," is so nakedly honest and heartfelt, you'll almost want to turn away out of respect: "You really are the Voice of the People/It only took four bars and I was a fan/Yes, you really are the Voice of the People/The King of Ska and one hell of a man/Well I love you now/More than I did then/And it makes me proud/To say that you're my friend/So when the fat girl sings/When all is said and done/Well you should take a bow/Jamaica's #1/You've got that voice/And you've go that look/Your name is Prince/but you're a king in my book." Nice to know that big time musicians (KH has won a Grammy!) can sometimes be reduced to wide-eyed fanboys like the rest of us.

One of the more unusual and cool cuts on the album is the wound-up ska-goes-bhangra (check out those sitar riffs!) of "Tick Tock...You're Dead" (about the dangers of stress), which includes a couple of neat New Wave references: "Be like Frankie/Kick back and relax" and a spoken word bit reminiscent of the one in Ebn Ozn's "AEIOU and Sometimes Y" (You know, "There are 178 parent languages on our planet, with over 1,000 dialects. It's amazing we communicate at all. Language and dialects with this one thing in common: AEIOU sometimes Y.")

"ASP (Reggae Movement #3)" is a superb old school ska instrumental, while "Mr. DJ" gives voice to thoughts that many of us have probably had when attending a dance, wedding, or party: "Hey, Mr. DJ/Play some reggae...I wanna hear some Desmond Dekker/Laurel Aitken, or Scratch the Upsetter!" The final track on Showbiz is "Rudie's in Jail for Christmas," a fine addition to the growing canon of modern ska Xmas tunes about a petty criminal busted for essentially trying to jump the turnstile in the London Underground (his Oyster card betrayed him). He can't make bail, so it's Christmas in the pokey. The chiming bells keep it cheerful and holiday-like, even if the subject matter is a bit bleak. But, then again, the highs of the holidays can also trigger the blues. I'll definitely be breaking out this one in the weeks before December 25.

(The videos posted below were created by the incredible Paul Willo, who also designed the back cover and CD face of KH's Showbiz album.)