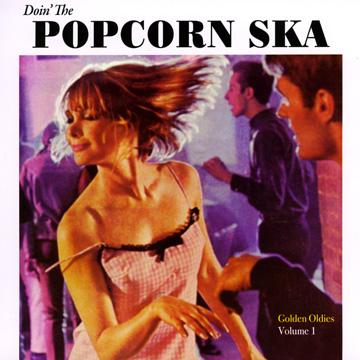 Things don't look very promising when you first peruse the list of artists on "Doin' the Popcorn Ska" and come across such early 1960s squeaky-clean, Wonder Bread-types as Neil "Breakin' Up is Hard to Do" Sedaka, former Mouseketeer and Beach Party movie series star Annette Funicello, and doo-wop trio The Fleetwoods (the exception is "Baby" Earl and The Trini-Dads--but we'll get to them in a minute). You'd think to yourself, what could these pop artists possibly know about ska music?

Plenty, it turns out. And that's what is so surprising about this record. All of these artists aren't just lazily mimicking the ska sound--they were making serious attempts to work within the parameters of this musical genre (albeit while pursuing their dreams of topping the pop charts).

The unlikely and now almost unimaginable hit that Millie Small scored in the USA in 1964 (#2 on the US and UK charts--the first ska crossover hit--selling over six million copies world-wide) with her cover of Bobby Spencer's "My Boy Lollypop" (which was originally recorded by Barbie Gaye in 1956 and was a minor R and B hit in NYC on Alan Freed's show on WINS) spawned the first, brief ska craze in America (see the surreal Bob Hope/Annette Funicello video below, where Hope bungles which album she's promoting), as musicians scrambled to capitalize on Small's hit sound (produced by Chris Blackwell and arranged by Ernest Ranglin, who also played guitar on the track). The interest in ska, no doubt, was also reinforced in part by the appearance of several ska artists in the Jamaican Pavilion at the 1964 World's Fair in New York City, where Byron Lee and the Dragonaires backed Prince Buster, Eric "Monty" Morris, Millie Small, and Jimmy Cliff. Plus, other forms of traditional Caribbean music had proved extremely popular with music fans in the US. Harry Belafonte's 1956 Calypso album (which contained mostly mento, actually, and featured songs like "Day-O" and "Jamaica Farewell") was the very first LP in any genre ever to sell over a million copies.

Musically, The Fleetwood's buoyant "Ska Light, Ska Bright"--written, recorded, and released by the band a few months after Millie Small's chart success--hews fairly closely to the established "My Boy Lollipop" model (each short vocal line alternates with the horn riff), but mixes in a few elements of teen pop from that era--like the spare vocal intro sung over strummed guitar chords and the trio's vocal arrangements during the chorus (as well as chastely pining for a special someone: "I used to wish upon a star/But stars can't hear/they're much too far/Instead, I've learned to wish upon a ska/You'll hear me, ska light, ska bright/First ska I dance tonight/I wish I may/I wish I might/Do the ska with her tonight"). Considering that this Pacific Northwest group (Olympia, Washington to be exact) had very limited access to recorded Jamaican music (let alone culture), this is a strong outing in uncharted territory.

For Annette Funicello's latest "Beach Party" sequel tie-in LP in 1964 (the movie this time out was "Bikini Beach"), the folks at Disney turned to Byron Lee and the Dragonaires' song "Jamaica Ska." That year, Atlantic Records had released a compilation of Byron Lee and the Dragonaires (appearing as The Ska Kings) productions called Jamaica Ska, which included the 1962 song of the same name (Lee distributed Atlantic releases in JA, so the label had a direct connection to other ska artists after "My Boy Lollipop" hit it big--apparently Atlantic label head Ahmet Ertegun went down to Jamaica to check out the scene and Atlantic tried to score a hit on the US charts with "Oil in My Lamp" by Byron Lee and The Ska Kings, with Toots Hibbert on vocals, but it flopped, as it only appeared at #98 for one week). So for her Annette at Bikini Beach album, Funicello's producers probably decided to take a shot with a ska song. It's "beachy" dance music from the Caribbean that already had some huge exposure/traction in the US--and since any teen music fan worth their salt probably knew that "My Boy Lollipop" was a ska song, it didn't hurt that Lee's track had ska in its title and chorus. Annette's version is a good and faithful reading of the tune, but her vocals definitely conform to the (white) mainstream teen pop expectations of the day, which can seem a bit jarring when heard in the present-day context. (Annette also revisited this tune years later for the Beach Party parody Back to the Beach (1987) with Fishbone making the music--see the video below).

Neil Sedaka's "Do the Jellyfish" (1965)--which he must have written when he was slumming between hits, as it appeared on the soundtrack of the jellyfish monster-man B-horror film "Sting of Death"--skates perilously close to novelty record due to its crummy lyrics ("Wella/Fella/Get your Cinderella/and do the jilla-jalla-jella/It's really swella/To do the Jellyfish"). However, if you block out what Sedaka is actually singing, he's penned a pretty decent, catchy ska song--one that is ripe for being covered, but with brand new lyrics (I'm begging you!).

The real treasure on "Doin' the Popcorn Ska" is "Baby" Earl and the Trini-Dad's revved-up "Back Slop," which beautifully illustrates the connective tissue between R and B, early rock 'n' roll and ska. It's essentially a pumped-up 12-bar blues instrumental (something the early ska artists in JA would hear broadcast from a radio station in New Orleans) married to a Jamaican ska offbeat--and it works so well (I actually hear "Night Train" in there, which was covered both by The Toasters and The Scofflaws in the early 90s). "Baby" Earl and the Trini-Dads were better known as the Church Street Five, the Norfolk, Virginia-based Legrand Records' house band, which played on raucous early-'60s R and B/rock 'n' roll hits by Gary "U.S." Bonds and Jimmy Soul (interestingly enough, both artists recorded calypso or calypso-inspired cuts backed by the Church Street Five). Now that "Back Slop" is in print once again, you're gonna hear a lot of ska DJs play this one, as it's guaranteed to fill the dancefloor...

Thanks, Chuck! (I had a general link to your label at the top of the post, but not this direct one for Popcorn Ska!)