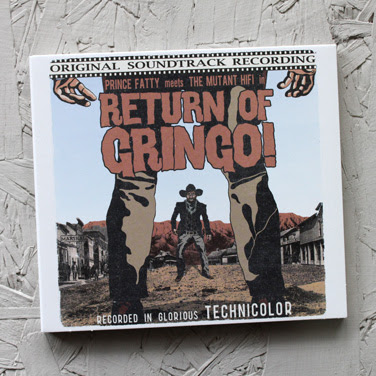 During the 1960s, the unlikely--but extraordinarily fruitful--pop culture co-mingling of Jamaican reggae with American Wild West mythology was largely influenced by the deliciously over-the-top "spaghetti Western" films of Italian director Sergio Leone and his "Dollars Trilogy" ("A Fistful of Dollars" in 1964, "For a Few Dollars More" in 1965, and "The Good, The Bad and The Ugly" in 1966--all of which featured a then relatively unknown Clint Eastwood), though films by Sergio Corbucci ("Django," 1966) and Sergio Sollima ("The Big Gundown," 1966) also had an enormous impact on Jamaican audiences and culture.

These movies--featuring supremely confident and super-humanly skilled anti-heroes (traversing bleak, almost post-apocalyptic landscapes) confronting nefarious villains and meting out swift 'n' bloody justice via their blazing pistols/rifles/Gatling guns--were incredibly popular in Jamaica when they stormed local cinemas in the mid-to-late 60s, as they were simpatico with the rude boy/outlaw/rebel ethos propagated by and celebrated in reggae music. (Indeed, in the quintessential Jamaican rude boy film, Perry Henzell's 1972 movie "The Harder They Come," Jimmy Cliff's character Ivan Martin catches "Django" at the local cinema before going out in a blaze of glory himself.)

But these films also triggered the musical imagination of some of JA's greatest producers and musicians, such as Lee "Scratch" Perry and The Upsetters (whose "Return of Django" climbed as high as #5 on the UK singles chart in 1969), Lloyd Charmers and The Hippy Boys, Derrick Harriot and The Crystalites, Harry J, Clancy Eccles, Joe Gibbs, and many more who released dozens upon dozens of "Dollar" sides (many of which can be found on the brilliant and essential Trojan compilation For a Few Dollars More: 28 Shots of Western Inspired Reggae).

On the superb Prince Fatty Meets Mutant Hi-Fi in Return of the Gringo, Mike Pelanconi (Prince Fatty) and Nick Coplowe (Mutant Hi-Fi) both pay tribute to the spirit of their musical Jamaican forerunners, as well as compellingly expand the canon of Western-themed reggae (though sometimes fondly tongue-in-cheek: see the Eastern European/Transylvanian-flavored "The Good, The Vlad, and the Ugly" or the almost noir-ish "Blondes Have More Guns").

The scorching album opener, "Transistor Cowboy," starts with a pair of echoing gunshots exploding one at a time from each speaker, heralding the wicked, minor-key surf/rockabilly guitar licks that ride magnificently over a frenetic ska backbeat, sounding for all the world like Dick Dale fronting The Upsetters. (Throughout the album, there are fantastically evocative sound effects galore, as well as dialogue clips from real and/or imagined Westerns--check out Old Testament revenge-themed "Wear the Black Hat (If the Black Hat Fits).")

Other highlights include The Skatalites-inspired "Up the Creek"; a very Specials-sounding "Moscow Mule," with its sparse and eerie Jerry Dammers keyboard line and Roddy Radiation guitar riffs; the Mexican/Latin horns of "Across the Border"; the mournful melodica heard in a "Plague of Locusts"; and their respectful tip of the hat to the incredible spaghetti Western film scores of Ennio Morricone (sample "Titoli" from "A Fistful of Dollars" here) with the whistled melody of "Son of a Thousand Fathers" (which actually features Alessandro Alessandroni, the musician who whistled and performed on many of Morricone's spaghetti Western soundtracks!). You can almost see the shimmering mid-day heat rising off the caked earth in the harsh, quivering and bending guitar chords on the "Way Back to Town." And the album closes--no doubt, in tribute to Dick Dale (whose sound is borrowed so heavily here and who also covered and scored a big hit with this song in 1963)--with a raucous and blisteringly fast reading of the Hebrew folksong "Hava Nagila" (its offbeat rhythmic structure makes it a natural ska cover).

One can only wish that there could ever be a spaghetti Western film worthy enough to go along with this spectacular soundtrack...

The CD, LP, and single are available in the US through Ernie B's Reggae.

Preview all of the tracks on the album here.

you know, I was reading about this in the EB catalog thinking how much you'd probably dig it. (based on your Ringo The Gringo Laurel disc) I haven't heard Fatty yet, but based on this review will surely track it down! Recorded in Technicolor no less!

methinks "For A Few Dollars More is the superior Trojan comp when matched with the more recent V/A "Big Gundown" collection.

One of the cool things about Ernie B's Reggae is that you can preview the tracks on any new CD, LP or single. So check out all of Prince Fatty's stuff!

Kick ass, I want this. There MUST be a connection between this and Bad Manners Album "Return of the Ugly"? The album name, artwork and name "Prince Fatty" are all too big of a coincidence not to be connected?

Thanks for your feedback, Matt!

The title of Bad Manners' "Return of the Ugly" (an album with a lot of Western themes in it, with songs like "Buffalo Ska" and "Bonanza Ska" ) is also a nod to the Upsetters track of the same name, which is a "Dollar" side/spaghetti Western reggae track.

However, I don't know if Prince Fatty's name has any connection to Buster Bloodvessel and his various nicknames. Haven't ever heard or read anything to confirm that.

That Bad Manners album is one of my favorites.