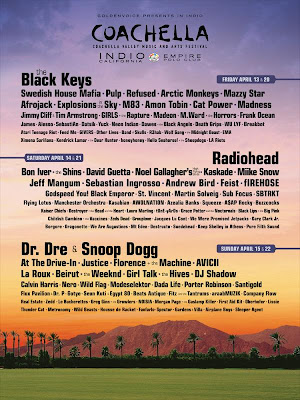 The ginormous line-up for the 2012 Coachella Festival has just been announced and two notable ska/reggae artists are included this year: Madness and Jimmy Cliff (with Tim Armstrong).

This festival is taking place over two weekends in April--and the exact same line-up for each day will play twice in a row over the two weekends. So, Madness and Jimmy Cliff both happen to be scheduled to appear on April 13 and April 20.

Prior to Coachella, Madness are playing the Vive Latino Festival in Mexico City on March 23-25, 2012. Other Madness North American dates are rumored to be in the works (according to Madness Central), but nothing has been announced to date.

Being the musical Anglophile that I am, I'm very jealous of the West Coast fans that will also have the opportunity to see bands like the Horrors, Kaiser Chiefs, Buzzcocks, Squeeze, Arctic Monkeys, and the Vaccines...
Posted by Steve from Moon at 9:22 PM