Duff Review: The Resignators "See You in Hell" 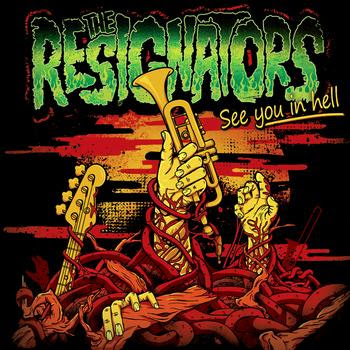 When the “third wave” disintegrated after its heyday, its greatest victims weren’t the polar opposites of trad and ska-punk, but the goofy, cheeky, and proudly immature sounds of Mustard Plug, Planet Smashers, MU330, and The Aquabats. That style seemed to attract the most budding, pre-elitist ska fans circa 1994-95, and it was also the style most easy to grow out of.

It’s rare, then, for a band to embrace those happily dopey halcyon days, that fleeting moment when bands actually sang about “skanking” and inspired you to wear a checkered suit with a long wallet chain to high school. Well, Australia’s The Resignators, as shown on the album cover, are returning this music from the grave.

Despite the sepulchral imagery, they’re not a horror/ska-punk band a la The Independents. This is simple, youthful, good-natured third wave with a peppy, positive vibe that compensates for their dubious career choice. Like the bands mentioned above, The Resignators are uptempo; often, their only connection to Ska (capital S) is fast-paced guitar up-picking and bright horn lines (the horn section here is actually quite good). Not unusual for this genre, the vocals can be flat, but gang choruses and "whoa-oh’s" make up for it.

It’s hard to critique a band that just wants to have fun. I’m sure The Resignators know that their mindless ode “Taco Burrito” won’t win any songwriting awards, but that doesn’t stop them from gleefully intoning “Tacooo, whooa ohh ohh, burritooo!” until it’s stuck in your head. And maybe that small nostalgic part of you won’t mind such a tasty, cheap treat.
Posted by Steve from Moon at 8:38 PM