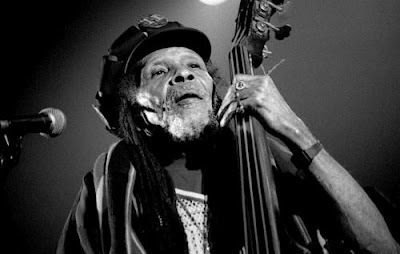 I want to extend my most heartfelt condolences to former (and founding) Skatalites bassist Lloyd Brevett and his family following the terrible news regarding the murder of their 32 year-old son, Okeene, who previously that day had accepted an award on his father's behalf from the Jamaica Reggae Industry Association. (No motive is known for the shooting and there are no suspects in custody.)

Back in the 90s, I had the great honor and pleasure of working with Lloyd, as Moon had licensed his African Roots album (which was originally recorded and issued in 1975 and featured many of his greatest compositions performed by The Skatalites) for release in the United States. He was a frequent visitor to the Moon Records offices on East 10th Street and l always loved speaking with him about his record, as well as the latest things happening in The Skatalites' world.

Brevett, who is not in good health, had been planning on spending the rest of his days in Jamaica, but now may be leaving the island for good.
Posted by Steve from Moon at 12:05 AM