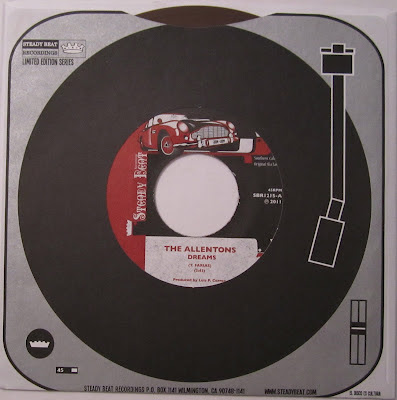 The Allentons are a sharp vintage ska/rocksteady act out of LA that, since the mid-1990s, have released several stellar albums and a slew of singles on Luis Correa's essential Steady Beat Recordings (and I was lucky enough to be able to include their "Molly" on Skarmageddon 3, which I compiled for Moon Records back in 1997). "Dreams" b/w "Sleepwalk (Version)" is The Allentons' first release since their appearance on the Jump Up Records/Megalith Records Still Standing mega compilation in 2003--and it's a pleasure to discover that the band hasn't lost their deft touch for composing killer tunes and artfully delivering the goods in the studio.

"Dreams" is a great, almost shambling rocksteady track, where the bass line sounds like a fiercely thumping heart that's skipping a beat. So it makes sense that this track is about being knocked off your game. You're stupefied by your love for a woman who may or may not know that you exist...but hope in the possibility of it all keeps you from a fall into despair: "You're the one that I want/You're the one I'm dreaming of/Darlin', won't you let me in?/Every night and day I dream for you to be in my heart!"

The excellent flip side, "Sleepwalk (Version)," shakes off the somnambulist's lurching stupor (ironic, considering the title) with lively, get-up-and-groove toasting and boasting by the verbose Don Chico--whose style is reminiscent of the mid-to-late 70s deejays like Lone Ranger--over the "Dreams" instrumental track.

The Allentons' single is a brilliant return for one of the best traditional acts the US ska scene has produced. And it gives yet another reason for ska fans far beyond Southern California--like this crusty, die-hard Gothamite--to be secretly wishing they called the City of Angels home in order to have the chance to experience this band live on a regular basis...
Posted by Steve from Moon at 12:30 AM