Hey, I Joined a Band!

Thanks to Marc Wasserman (AKA Marco on the Bass) for pointing out that we're in Roddy Radiation's band, The Skabilly Rebels, who are touring California and the Southwest of America this February and March! (Pick up The Skabilly Rebels' fantastic LP Blues Attack from Jump Up Records and check out this interview I did with Roddy last summer).

Apparently, whoever put together this brief show preview for SanJose.com was pretty, um, lazy about their image selection for the accompanying photo. Yes, Marc is wearing a Skabilly Rebels t-shirt, but he's with me, Nik Torp and Drew Stansall from The Specials (keyboards and sax, respectively), and Sid Reitzfeld from Thick as Thieves/the A-Kings--and we were at B.B. Kings for the NYC Ska Festival show that took place in 2010. But Marc's shirt is the only real connection, if you will, to The Skabilly Rebels. (By the way, Sid's brother Pete Reitzfeld took the photo of all of us.)

Are there no images of Roddy Radiation circulating on the internet? 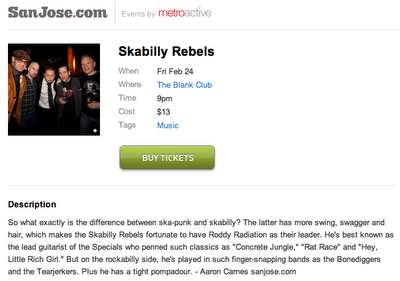 Email ThisBlogThis!Share to TwitterShare to FacebookShare to Pinterest
Labels: A-Kings, Jump Up Records, Roddy Radiation, The Skabilly Rebels, The Specials, Thick as Thieves