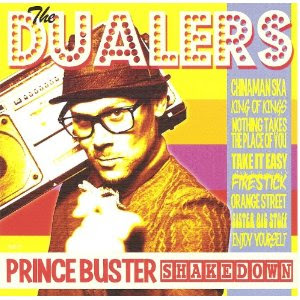 With Prince Buster's 74th birthday coming up in just a few days (May 28th, 1938), I thought an appropriate way to honor him and his music was to review of The Dualers' new big guns salute to The Prince, Prince Buster Shakedown.

While Prince Buster's back catalogue is incredibly deep and rich (see King of Ska, Rock A Shacka  Volume 2, Voice of the People, Rock A Shaka Volume 5, Dance Cleopatra Dance or his reissued LPs or compilations from the 60s to scrape the surface), the songs that are most familiar (and beloved) to ska fans are those popularized by the 2 Tone bands and off the Buster LPs that were relatively easy to unearth in the pre-internet age (like Fabulous Greatest Hits). Apart from the very familiar "Enjoy Yourself" (whenever I hear it, I expect to hear, "Hello, I'm Terry and I'm going to enjoy myself first..."), the tracks selected by The Dualers are still amongst Prince Buster's more popular ones (with the exception of "Chinaman Ska" and the mento cut "Firestick"--a.k.a. "Old Lady Oh"), but manage to avoid the ones typically covered by devotees in bands around the world.

The Dualers' arrangements tend to remain faithful to Buster's originals, but with smart and subtle differences (like the touches of piano and extra percussion in the opening to "Take it Easy," or the jazzy, muted trumpet in the intro to "Nothing Takes the Place of You"). And while all of the covers here are really uniformly great, the tracks that stand out are the ones that contain those little unique variations that allow the band to claim the tracks as their own (or at least borrowed for a bit). I find their treatment of "Orange Street"--one of my favorite Prince Buster penned-songs ever--particularly stellar, and other listeners are sure to have similar experiences with other cuts here.

Dualers singer Tyber Cranstoun grew up with Prince Buster as the soundtrack to his childhood (his dad helped introduce ska to London with his Savoy Sound System) and his knowledge of, affection for, and comfort with the material shines through. This, coupled with The Dualers' expert and heartfelt performances, makes for one winning record.