A Small Remembrance of Lloyd Brevett 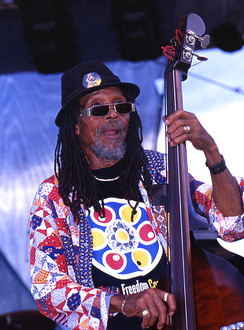 My brief relationship--a few interactions, really--with Lloyd Brevett was all music business, but I like to think that it gave me a small bit of insight into this legendary Skatalite's life.

In 1997, Moon Records licensed Brevett's African Roots album from Grover Records (it originally had been released in 1978 on United Artists as a Skatalites record, though the majority of the cuts had been written by Brevett; the Grover version featured these tracks, as well as some additional Brevett-penned bonus cuts, but credited the album to Lloyd Brevett with The Skatalites). Back then, I was responsible for all of the promotions, marketing, and production for Moon, and oftentimes handled all of the nitty gritty of the licensing deals after Bucket inked the contracts. At this point in the label's history, my office was in the back of the East 10th Street Moon storefront (for years, I had run my end of things out of my apartment), and it wasn't uncommon for band members to stop by for business or to catch up on the latest ska news and gossip.

My first encounter with Lloyd was only a few weeks after Moon had released African Roots (which featured a cheeky shot of Brevett smoking a spliff on the cover). One of the store staff (probably Big Abby) came back to the office to let me know that Brevett was up front in the shop, mad as hell, and wanted to talk to someone about his royalties. I asked them to send Lloyd back as I finished up whatever it was that I was doing. He strode in, cursing in Patois and roared, "Where's my money?!" Lloyd was followed by an entourage (of family members?), no doubt there to back him in any circumstance. The incensed, six foot plus Brevett loomed over the not so imposing five foot seven inches me. Needless to say, it was kind of tense.

As calmly as possible, I explained that it was too early to expect to receive any royalties from his album, since the CDs had barely been in the shops long enough to sell in significant numbers--and also that the label's business office and warehouse were located out in Verona, NJ. The books and checkbook were out there (though Brevett knew we had money on site and may have expected me to pull a stack of bills out of the store's cash register).

I also gave him an over as to what we were doing to promote the record (sending it out to hundreds of college radio stations, as well as our extensive list of music press and zines--and if we had any reviews back already, I would have shown them to him). As our conversation continued, I could feel his fury slipping away. By the time he left with some promo CDs of some of our other recent releases in hand, he was all smiles.

It was quite a contrast to the serene Skatalite I had seen on stage, keeping the riddim steady and tight. But any illusions I had about musicians being anything but real, fallible human beings had been shattered years before (some were a pleasure to know, others weren't so much).

This scene repeated itself about a month later--though Lloyd was now yelling my name in anger as he ranted about not receiving his due. Even though there was wrath in those eyes that cut through me, I knew what was really going down. He was playing his part, doing what he'd had to do over the years in order to get paid by Jamaican producers and label heads (who routinely paid the musicians just for the recording session and kept all the profits from record sales, publishing rights, etc. for themselves). You had to get in their face, make some noise and unpleasantness, and they'd hand over some cash (that they, no doubt, owed you and much more), just so you'd go away.

It was another performance that Brevett had to give in order to make his livelihood.

There were several other visits, but they seemed to be further and further apart (maybe The Skatalites entered a period of heavy touring?). And I think Brevett must have either made a trip out to Verona or run into Buck on the road, because he eventually stopped coming around to threaten me. I missed our encounters, as they were kind of thrilling (who wouldn't want to be in the presence of a great musician who had made history?).

As fantastic as African Roots was, the record never sold that well, despite The Skatalites' tremendous resurgence and success during the 1990s. The ska bust at the end of the last century was soon to topple the label and upend the scene, with ominous signs just beginning to make themselves known (if we wanted to see them).

After learning of the terrible murder of his son this past February (and his own poor health), I had the feeling that Lloyd would not be will us long. In a video interview with Lloyd and his wife made after the murder, you could see that the light and life were gone from his eyes.

May he somehow rest in peace.

Thanks for sharing this story. Those must've been some pretty crazy encounters.

The stand-up comedian Greg Proops, one of the "Whose Line is it Anyway?" guys mentioned Lloyd's passing on a recent Proopcast-- where he also talked about Adam Yauch.

Again, thanks for sharing this story.

Interesting how so many people know of The Skatalites...

Thanks for sharing Steve. It took me right back to when I had money for Lloyd! Also to when I was called to Heartbeat to deal with a visit from Leroy Smart.
Whose photo credit is that? Can you confirm it was taken on June 16, 1996 at the Tibetan Freedom Festival in Golden Gate Park? Still got my t shirt but it doesn't look like that anymore...