The Toasters Headline Ska Nation Festival in Australia, Plus Dates in Hawaii! 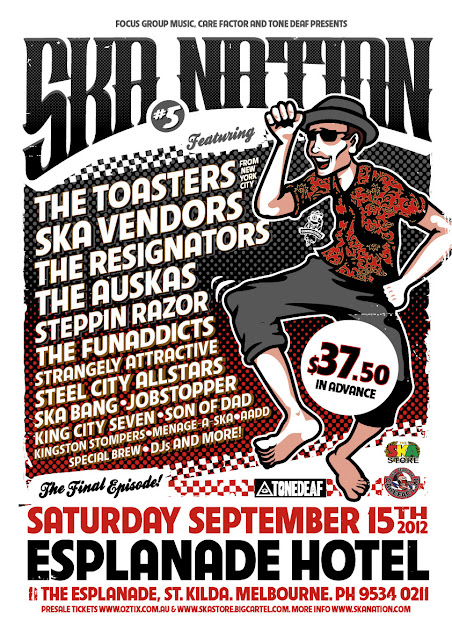 Over the span of their 30 years in service, The Toasters have traversed most parts of the globe (much to the delight of Bucket, I'm sure, who is a life-long student of history, languages, beer, and gastronomy). In past interviews, I've heard him often mention that they've never made it to Australia, which always struck me as odd, since they've been to Japan and just about everywhere else on the planet (right now, they're just coming off a tour that has taken them to Albania, Bosnia, Greece, Bulgaria, Romania, Hungary, Poland, Germany, Belgium, and the Czech Republic).

Finally, this minor injustice has been corrected with the announcement that The Toasters are headlining the last Ska Nation festival in Melbourne, Australia on September 15, 2012 (see poster for details). This also marks the first publicly released date on their fall tour of Australia and Asia (should be interesting to see where else they play in that part of the world).

In addition, ska fans in Hawaii will be treated to two dates as The Toasters make their way Down Under. They're playing Hawaiian Brains in Honolulu on September 7 and the Hard Rock Cafe in Lahaina on September 8.

US Toasters fans in the Northeast have a chance to catch The Toasters in action this June: