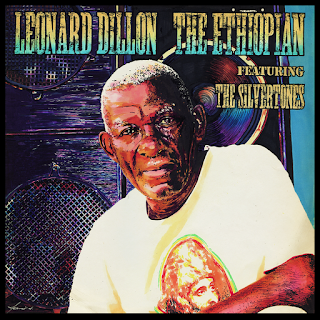 When you first put the needle on Leonard Dillon's stunning new The Ethiopian--released about half a year after his death from cancer at the age of 68--the first unnerving lyric you hear is, "Let me live..." While this album was recorded in 2009 (before he was sick), there is a sense of reckoning that pervades these songs (perhaps not surprising, given the often apocalyptic imagery inherent in roots reggae), but there are also many affirmations of Dillon's fierce devotion to Jah--and to leading a righteous, moral life that is infused with the joy and pleasure of living. To complete the lyric, Dillon wants to, "live in a world of truth/'cause we all living in an upside-down world/Babylon won't let me be the way it ought to be, my brothers, my sisters/So come with me, to the land of the free/where peace and love will be, will always be." (In what was then a groundbreaking and highly influential move, when rocksteady transitioned into early reggae, many of Dillon's and The Ethiopians' songs began to incorporate socially/politically conscious lyrics with overt references to the Rastafari movement. The band's name itself alludes to all sorts of key Rasta tenets: the belief that Haile Selassie I, Emperor of Ethiopia, was either an incarnation of Jah or reincarnation of Jesus; and that Ethiopia is where a new promised land, Zion, will be established to deliver the faithful from the evil and corruption of Babylon/Western society.)

Indeed, about half of Dillon's songs on The Ethiopian are deeply religious in nature, but they're never stiff or preachy, as the undeniably infectious and first rate roots reggae riddims coupled with Dillon's warm, sincere, and absolutely exuberant delivery make a compelling case for conversion to Rastafari. The extraordinarily upbeat "Jah is Love" is a primer for those unfamiliar with the deity: "You don't know about Rastafari/You don't know about life/Jah is love/Jah is tenderness/Jah is peace/Jah is happiness/So love your brother as you love yourself/Be your brother's keeper and Jah Jah will help." The heavy 23rd Psalm-like "Jah is My Light" offers solace for desperate times: "Jah is my light/so I can see/Jah is my light/He comforts me/He will be forever/The Devil won't conquer/'cause Jah is the answer/He'll stand by me/forever and ever." And whether or not he was intentionally echoing MLK, Jr. ("...not be judged by the color of their skin, but by the content of their character"), Dillon's declaration on "Good You Do"--"I no have a dreadlocks/but I am a Rasta/It's not how you look/but the things that you do/I am hearticaly dread/I am a Rasta"--takes on those who may doubt or dismiss his faith simply because he doesn't display the outward trappings of a Rasta.

For those unfamiliar with Rastas' use of cannabis or ganja (a name which derives from Sanskrit, as many migrant and indentured Hindu and Muslim workers from British colonial India came to Jamaica in the first half of the 20th century and brought the culture of ganja with them), smoking it is a considered to be a spiritual act--a sacrament--that raises one's consciousness, heals the body and soul, and brings one closer to Jah. So, the song "High Grade" is essentially about making sure to smoke the best quality ganja, since it is the sole true path to enlightenment: "When people are suffering/only high grade/can free the mind." "Hotta Fire" is a Biblical reference to ceremonial purification, a cleansing of sin or evil by fire (and God often appears as fire or uses it as a means to punish the wicked). Here Dillon sings, "Let me burn/Let me burn/No one can put out this fire/This fire is burning hotta/Don't you say nothing/This fire is burning/Everyone's talking/Hotta fire." He wants to be as pure as one can be before Jah.

The remaining (but equally great) tracks are concerned with more earthly matters, such as love and commitment ("My Lady"), betrayal (the injurious"You Lied to Me"), and something in-between (the jaunty and questioning "On My Side").

It's astounding that this record--Leonard Dillon's final, crowning musical achievement--came about by happenstance. Ska and reggae lovers should be mighty thankful that Boston-based reggae producer Craig Welsch (John Brown's Body, The Aggrolites, and 10 Ft. Ganja Plant) happened to have put together some incredible roots riddims (with members of John Brown's Body and 10 Ft. Ganja Plant) and was looking for an iconic Jamaican singer to complete the recordings. David "Solid" Gould (bass player for John Brown's Body) hooked him up with Dillon, whom he had recently struck up a friendship with during a visit to JA. Dillon wrote some new songs and then recorded all of the vocals backed by The Silvertones (Keith "Sleepy" Coley and Gilmore "Smoker" Grant) in Port Antonio, Jamaica (which were then mixed back in Boston by Welsch).

Leonard Dillon's The Ethiopian is easily one of the top roots reggae releases of the year and serves as the capstone to his brilliant career as a reggae singer, songwriter, and performer. Dillon's departure from this world leaves a hole in his fans' hearts, but his music will endure for decades to come--bringing joy and comfort to all who hear it.