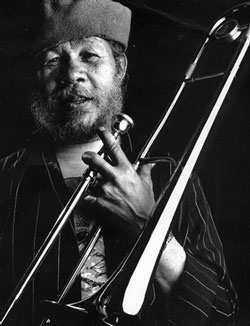 Ska/reggae trombonist Rico Rodriguez, best known for his work as a member of The Specials and The Special AKA, passed away on September 4, 2015 in England at age 80. Trojan Records has posted an excellent overview of his career, which can--and should be--read here.


Like thousands of ska fans, I was introduced to Rico through his extraordinary performances with The Specials and The Special AKA, which were essential to their sound and success. Indeed, what would "Nite Klub," "Do Nothing," "Man at C and A," "Ghost Town," "What I Like Most About You Is Your Girlfriend," "Racist Friend," "Nelson Mandela" (and their covers of "A Message to You, Rudy" and "Guns of Navarone") have been like without Rico's extremely warm, expressive, and meaningful playing? He was the 2 Tone era's premier trombonist and recognized/celebrated as such.

And his solo releases for 2 Tone (produced by Dick Cuthell and/or Jerry Dammers)--the albums That Man is Forward and Jama (read my appreciation of this record here), and singles "Jungle Music" and "Sea Cruise"--are all stellar (and are currently available on iTunes--though it would be great if whoever owns Chrysalis'/2 Tone's catalogue would issue these on CD!). Another phenomenal Rico release that can fairly easily be found is Wareika Dub (Ernie B's Reggae has the Island reissue in stock), which is the dub version of his 1977 Man from Wareika album.

Two of my many favorite Rico performances are on Prince Buster's (credited as Yusuf Ali and the Revolutionaries) "Uganda"--which is a version of Don Drummond's "Green Island"--and Laurel Aitken's "Daniel Saw the Stone."  Of course, this is brilliantly appropriate, as Don Drummond was Rico's mentor at the Alpha Boys School in JA and Rico frequently played on fellow Cuban-Jamaican Laurel Aitken's singles. One can only hope that the great and wonderful Rico Rodriguez is at peace, making incredibly joyful music with Drummond and Aitken in the great beyond.

My sincere condolences go out to Rico Rodriguez's family, friends, and fellow musicians.

Update (9/5/15): Make sure to read this amazing tribute to Rico by Jerry Dammers here.