There are two 2 Tone-related releases coming out this fall that should be of great interest to fans: The Selecter's Access All Areas CD/DVD (Edsel/Demon Music Group) on September 25, and John "Teflon" Sims' book "This Art Two Tone" (Omnibus Press) on October 12. 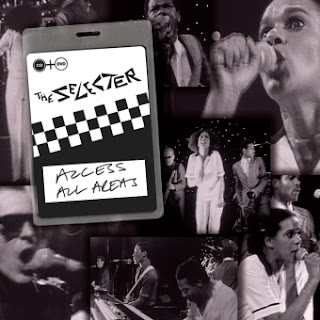 The Selecter's Access All Areas documents the band's August 13, 1980 performance at Nottingham's Theatre Royale (with The Swinging Cats as openers), which had been videotaped for ITV's "Rockstage" TV series. Of note, it was a transitional time for the band--they had just departed 2 Tone Records in July (essentially, over disagreements concerning the future direction of the label that they co-managed with The Specials and how out of control the whole 2 Tone craze had become--the massive amount of bootleg 2 Tone and "Selector" merchandise was a particularly sore point) and also that July had recorded their first single--"The Whisper" b/w "Train to Skaville"--for their own intentionally unnamed Chrysalis imprint ("The Whisper" single was the last time the band hit the UK charts--at #36 in August of 1980). And plans were in place to enter the studio again in late August to begin recording their incredible second album, Celebrate the Bullet.

Barely a week and a half after the "Rockstage" taping, both Desmond Brown (keys) and Charley Anderson (bass) were out of The Selecter (Desmond had quit, Charley was asked to leave--both had insisted that The Selecter head deeper into reggae territory--and they then formed The People). So, The Selecter's Access All Areas is a fairly significant release in terms of the history of the band, as it is the last live recording of the original Selecter line-up and, as far as I can tell, has never been previously issued!

John "Teflon" Sims, of course, is the graphic designer--along with fellow Chrysalis graphic designer David Storey and The Specials' Jerry Dammers--who helped create the incredibly iconic look of so many of 2 Tone's record sleeves and promotional materials. While there's not much advance information available at the moment on the internet, there is this blurb on Amazon: 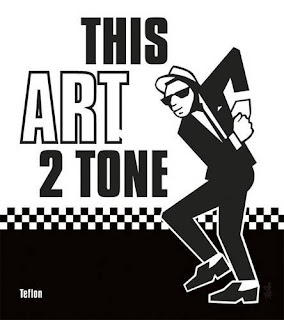 "In 1979, Teflon met with Jerry Dammers and Horace Panter of The Specials at the Chrysalis A&R Dept, and was presented with a label sized small sketch which Jerry with help from Horace had designed the iconic figure of Walt Jabsco, the instantly recognisable man in a black suit, white shirt, black tie, pork pie hat, white socks and black loafers. Teflon drew a large prototype artwork and soon after designed and illustrated the Nutty Dancer for the first single by Madness on the 2 Tone Records label. He worked closely with production of photographer Chalkie Davies and designer Carol Starr of The Specials' album sleeves. Teflon followed by designing many other 2 Tone graphics for record sleeves, posters, advertising and promotion. This Art 2 Tone is the ultimate visual celebration of the influential late seventies record label, written and designed by the man who played his part in the creative development and design of the 2 Tone unique look: Teflon. Now, Teflon has opened his archives, showing this classic work and more, accompanied by stories of those bands connected with the label: The Specials, The Selecter, The Bodysnatchers, The Beat and Madness."

For more info on "Teflon" Sims, check out this fantastic 2009 interview with him by Marco on the Bass.