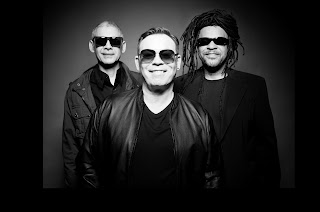 One of the two current versions of UB40 is playing Webster Hall in New York City Wednesday night, backed by Radio Riddler, who will be performing their own set (rumored to consist of their wonderful reggae versions of Prince's Purple Rain; check out my review of Radio Riddler's Purple Reggae album here). I had the amazing fortune to see the Ali Campbell-less UB40 at BB Kings in 2010 (read my review of that performance here), so I'm eager to see/hear what this incarnation is like!

Since a deluxe reissue of Present Arms is scheduled for a release in February 2016, I hope they'll play a few cuts from it; I prefer my UB40 songs with a political edge to them (read my appreciation of Present Arms here).

It'll probably be an older crowd (those who were teens in the first half of the 1980s), jonesing on some of that sweet nostalgia to (temporarily) erase some of the accumulated years. But all fans of ska and reggae should come! It should be a fun night with some great tunes! (Tix can be had here.)