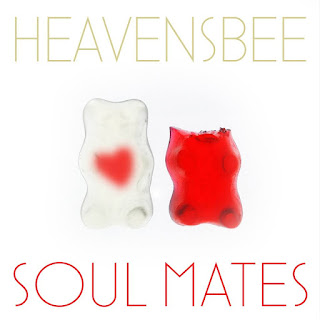 Named after a character from "The Hunger Games" (Plutarch Heavensbee, who is one of the leaders of the rebellion in District 13 against the Capitol), the new, intriguing, self-described "dub-pop" trio Heavensbee is comprised of members with deep roots in the NYC ska scene: Roger Apollon, Jr., Marc Wasserman, and Meg Howe. All three are currently in the ska-does-New Wave act Rude Boy George (full disclosure: I was a member of RBG for a spell), while Apollon and Wasserman are also founding/ongoing members of the terrific 2 Tone-influenced Bigger Thomas and Howe has her own excellent ska-pop-punk band, Across the Aisle.

As the brilliant and cheeky cover artwork might suggest, Heavensbee's Soul Mates is largely concerned with the seemingly enormous challenges of successfully navigating romantic relationships (without being emotionally devoured--love is a battlefield, indeed!)--with the ultimate goal of finding, and holding onto, one's perfect mate. Having said that, it's not an album full of happy love songs, but it certainly contains some very beautiful original music about the experience of looking for love.

Heavensbee's dub-pop sound is very much grounded in ska and reggae, but they also mix in small bits of rock and hip hop, and everything is coated in an appealing UB40-ish pop sheen (the songs were written by Wasserman, while the lyrics were composed by Apollon and Howe). Of note, most of the tracks contain compelling lyrical exchanges between the two singers--illustrating the push and pull/point-of-view of the two people engaged, locked, or trapped in the relationship (oftentimes going south).

One of my favorite tracks on Soul Mates is "Life Boat," an amazing, stripped-down pop song (vocals, keys, and clarinet) about a relationship "lost at sea," with unexpected pauses between their sung exchanges, like the singers only appear when the crests of the waves lift them up into sight/hearing range (and, in a similar vein, their lyrics are like these disjointed snippets/observations about their perilous situation that you only sometimes catch). The chorus includes this plea for rescue: "Lower, lower the lifeboat/fire, fire the flare." The pretty ballad/duet "Lay of the Land" covers similar topical territory (losing one's way in a relationship): "Frustration and the pain replaced the pleasure/the journey hasn't gone the way we'd planned."

Not everything on the album is sour. The fantastic Toots and Maytals'-like "Mr. Know Everything" has the female singer gently--but firmly--countering the male singer's swagger:

"(Roger:) I looked at my phone
and got the new reminder
Today's the day
You thought I would forget

(Meg:) Hey, hey, hey
I'll love you forever and always
But you don't know everything
My love, my darling

Did you know, they call me Mr. Know Everything?

It may be an imperfect relationship, but they're comfortable enough with being themselves--and understanding each other--and they've made it work (so far!).

Another fave is "You Put Me On," which has this driving, wonderfully menacing, New Wave-y ska sound. And, like another certain song from the 80s, compares vinyl records to relationships:

"(Roger:) You gaze around my party
and you caught my eye
I love the sound you make
And I don't know why

So many records, so little time...

(Meg:) You put me on
You spin me round
You turn me up
And turn me down
Roller coaster 'till the break of dawn
And then I'm gone

More love, pump up the sound
With each spin, I'm losing ground
Hold me gently, I'm not a toy
I need some love from my sound boy"

In this song, for the male singer, music/women are like dirt (in the Desmond Dekker sense of the word: everywhere, plentiful), but she wants to be his exclusive number 1.

As much as I love vintage, 2 Tone, and 3rd Wave ska (as well as roots reggae), I'm attracted to acts that like to take risks and experiment with nudging the genre's boundaries into fresh sounds and compelling places--something that Heavensbee is doing quite nicely. At the moment, this act is solely a studio creation; but my fervent hope the songs on Soul Mates are given life on stage. I very much want to see where they might go!