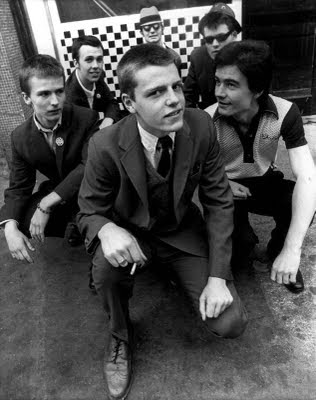 As part of Madness' ongoing 30th anniversary celebration, the band played a free show last Sunday (9/27) in conjunction with Absolute Radio (on the occasion of its very first birthday) on a stage set up on Regent Street in London--witness their entire amazing performance here.

Also, the Nutty Boys are taking over BBC 4 on Friday, October 3rd for an evening of Madness-related films and videos, including the British telly debut of the Julien Temple (Absolute Beginners) directed film The Liberty of Norton Folgate (which was filmed at Hackney’s Empire Theatre and combines live performances of the album tracks with a narrative thread with Carl and Suggs that unearths the tales of London town that inspired the album); live footage from their show at Glastonbury; Take It Or Leave It (which documents the bands origins and rise to fame); and Young Guns Go For It (which provides an overview of Madness' entire career). Here is the BBC 4 Madness schedule for the night:

All the programmes will be repeated on BBC 4 on Sunday 4th October and those outside the UK can catch all of the aforementioned on the BBC iPlayer.

Below, please find the teaser for The Liberty of Norton Folgate film...

Email ThisBlogThis!Share to TwitterShare to FacebookShare to Pinterest
Labels: Madness

Unfortunately, if you live outside of the UK, you can't access the BBC iPlayer. Hopefully, some of this wil show up on YouTube...