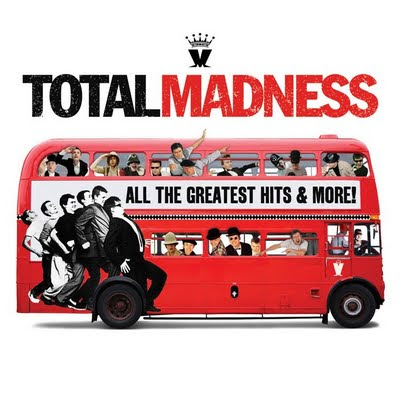 Sure, there have been a host of serviceable (Utter Madness) to great (Complete Madness) Madness compilations released over their 30 (!) year reign--so what makes Total Madness worth the blood, sweat, and tears of one's hard-fought earnings? For starters, Total Madness corrals all of the tracks that comprised their record-breaking run of twenty Top 20 singles, from 1979's "The Prince" to 1985's "Yesterday's Men," plus a few more key releases (though I would have swapped "NW5" for "Dust Devil" to represent The Liberty of Norton Folgate). It's almost unimaginable in this dark age of illegal music file sharing, but it serves as a testament to the band's great popularity: Madness sold a stunning 6 million singles in the 80s.

If you're a Nutty Boy newbie (or simply weren't paying enough attention back in the day) Total Madness is an extraordinary introduction to the band, capturing their early ska hits; their progression into Motown-music hall-Britpop territory; and eventual (though not permanent) shedding of their ska skin for pure pop perfection. For someone whose teen years coincided with the first half of the 80s, Madness' singles will always be linked to certain moments in time, but like all truly classic pop songs, they sound fresh and vital no matter what the context or when you hear them--they defy all transitory musical fads and escape being encased in the amber of memory and nostalgia.

Oddly enough, the tracks here are not presented in chronological order--the comp is bookended by two ska hits guaranteed to pack the dancefloor: "One Step Beyond" (1979) and "Night Boat to Cairo" (1980)--but what is most striking is how this manifests Madness' consistently strong songwriting and performances over the decades. If you didn't know anything about the band, you'd be hard-pressed to sort out which songs were recorded when (some of which, no doubt, is due to the aural sheen applied by their ace pop producers, Clive Langer and Alan Winstanley). It's also worth noting the melancholy tone and emotional depth of many of their hits (see "My Girl," "The Sun and the Rain," "Cardiac Arrest," "Grey Day," "Michael Caine," etc.), something surely lacking from today's Billboard pop charts.

To appeal to the die-hard Madness fans and completists, Total Madness also sports a DVD of all of their wacky Monty Python/Benny Hill/Mr. Bean-ish music videos (one for every song on the accompanying CD except for "Madness," which was never released as a single), which beats the crap quality of YouTube or your disintegrating VHS tapes hands down. While this DVD will not play in North American DVD players, it is viewable on your computer (I had no problem opening it up on my Mac...).

Union Square Music (via their Salvo label) is also reissuing an expanded version of Madness' debut album, One Step Beyond (to be followed, one assumes, by the remainder of their catalogue from the first half of the 80s). So while the hit singles are collected here for your listening pleasure, there's loads more Madness brilliance to be mined and treasured on their albums proper.

The Duff Guide to Ska Total Madness Grade: A
Posted by Steve from Moon at 8:54 PM

The question is though, is this being released in the US? Cause if not, then it's a moot point with the DVD. Cause it won't be region free or NTSC...which is the whole reason I have never gotten a copy of their first DVD video collection "Divine Madness" which has been out in the UK for years (although you have to sort through the Bette Midler crap on eBay to find it!).

So, awesome if it's a US release as well, suck ass if it's an "import" only title...Plus the fact that I own at least 20 Madness cds and at least that many 7inches and more 12s... :) So I have bought these songs over and over again...but I'll do it again if it comes out here in the US just for the dvd!

Jer: There was no DVD provided with the review copy I received. Let me check in with their PR peeps--I'll let you know what happens.

Thanks for your comments!

this is cool, and if its released in the US than cool. I dont need the videos though, because I have "The Lot" box set, and it had all the songs. im more excited for the reissues than another collection.