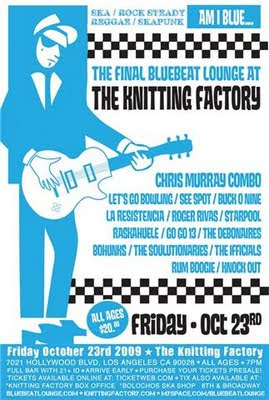 Even though The Duff Guide to Ska is somewhat New York City-centric, we're really sad to see Chris Murray's Bluebeat Lounge coming to an end--after seven years!--with the closing of The Knitting Factory Hollywood. The final show line-up looks amazing and it's sure to be a bittersweet experience for all.

Chris has performed an incredible service for all of the bands that have graced that stage, as well as all of the fans who have enjoyed the shows. At this point, there is no word as to whether or not the all ages Bluebeat Lounge will relocate to another venue--but knowing Chris' determination and resourcefulness, I'm sure whatever comes next will be spectacular. So, we're hoisting a Pacifico in Chris Murray's and the Bluebeat Lounge's honor...

Bands that are part of an underground music scene--such as ska--obviously need a musical home, so to speak, to find and cultivate their audiences; showcase new and burgeoning talent; hang out socializing, networking, and drinking; and generally keep the whole thing moving forward. While ska bands in NYC have been lucky enough to have a host of welcoming venues to play (Danceteria, Tramps, Peppermint Lounge, The Gas Station, The Ritz, and New Music Cafe to name just a few--all long shuttered), clubs like CBGBs (in the 80s), Wetlands (90s), and The Knitting Factory (2000s) were/are vital to the existence of the scene. And despite any shortcomings, these particular clubs--as well as the ones wherever you live that support ska--deserve mad props for letting the ska people in to do their thing on a regular basis. 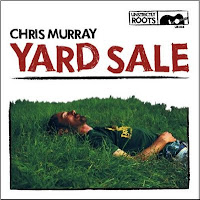 While we're on the subject of Chris Murray, we should note that he has a new album out called Yard Sale on his Unstrictly Roots label. Yard Sale sports 20 tracks recorded during the 15 years transplanted Canadian Chris Murray has called the City of Angels his home and features collaborations with such ska stars as Lloyd Knibb, Lloyd Brevett and Cedric Brooks of The Skatalites, Brian Dixon and Jeff Roffredo of The Aggrolites, and Vic Ruggiero and Jay Nugent of The Slackers.
Posted by Steve from Moon at 8:49 PM