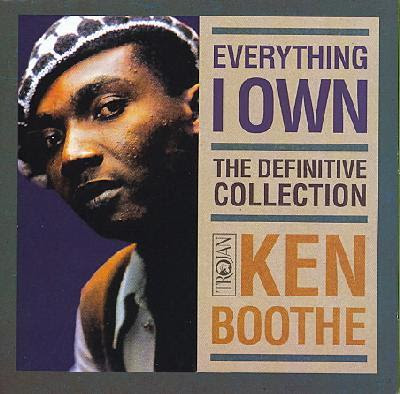 It has just been announced that legendary Jamaican singer, Ken Boothe (AKA Mr. Rocksteady), will be performing at the 2011 London International Ska Festival next April. Mr. Boothe is the first of five old-school Jamaican artists to be announced that will be performing at the ska fest. Here are some highlights of his career, provided by festival organizer Sean Flowerdew:

Best known for his No.1 UK hit 'Everything I Own', Ken started his musical career by winning a singing competition at the age of 8, in his birthplace of Kingston, Jamaica. His debut recording came in the ska-era when he teamed up with Winston 'Stranger' Cole in the duo Stranger And Ken, releasing classic cuts including 'World's Fair', 'Hush' and 'Artibella', before moving onto Clement Dodd’s Studio One label. A series of classic cuts followed including 'The Train Is Coming' (on which he was backed by Peter Tosh, Bunny Wailer & BB Seaton of The Gaylads) and 'Moving Away'. In 1967 he toured the UK for the first time with fellow rocksteady legend Alton Ellis. The tour was hugely successful, with Boothe being promoted as "Mr.Rock Steady". The title was also used for his superb debut album the following year, which contained the unlikely but huge selling rocksteady version of 'Puppet On A String'.

Upon leaving Studio One he was in demand with Jamaica's top producers: Sonia Pottinger, Phil Pratt, Leslie Kong, Bunny Lee, B.B. Seaton, Keith Hudson, Randy's, Niney the Observer, releasing many island hits including 'Freedom Street'. In 1974 Ken Boothe teamed up with producer Lloyd Charmers, a pairing and subsequent releases on Trojan Records, that spawned his two biggest UK hits. The aforementioned 'Everything I Own' top the charts for 4 weeks and the follow-up 'Crying Over You' reached number 11. The pair also issued other superb versions of 'Who Gets Your Love', 'Let's Get It On', 'Silver Words' and Ain't No Sunshine'

To this day Ken Boothe tours all over the world and remains one of Jamaica's most loved vocalists with his uniquely emotive and soulful style. In 2003 this fact was recognised by the Jamaican government awarding him the Order Of Distinction for his contribution to Jamaican music.

Also of note, the LISF has launched its own website.
Posted by Steve from Moon at 9:53 AM