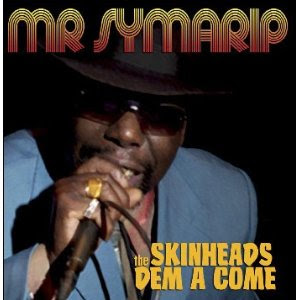 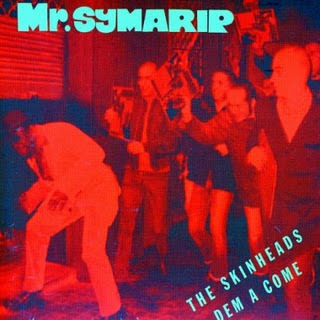 Editor's note: Since Roy Ellis recently played several high profile gigs in the U.S., we thought it might be good to give a review to his most recent release (even if it is a few years old)...

While Mr. Symarip (AKA Roy Ellis) will forever be associated with his stellar, ultra-popular skinhead reggae group Symarip, it comes as a bit of shock to discover that The Skinheads Dem a Come is a flat-out Skatalites-style vintage ska album--there's not a lick of early/"dirty" reggae to be found here. (Indeed, one album that I'm immediately reminded of in terms of its sound and quality is Lord Tanamo's incredible collaboration with Dr. Ring Ding and the Senior Allstars, Best Place in the World.) Skinhead reggae fans pining for the sounds of '69 might be disappointed by this news, but they should definitely not despair. Mr. Symarip is in top form on The Skinheads Dem a Come, performing fourteen terrific original ska tunes, all backed by spot-on session men.

Dubbed the "Pied Piper of skinheads" by a certain well-known ska insider who has witnessed the extraordinary loyalty exhibited by Roy Ellis' fans (on the red album cover, the skins are not trying to beat him, but chasing him down to sign their copies of Skinhead Moonstomp--they're showing him the love!), The Skinheads Dem a Come largely celebrates and/or name checks reggae skinhead style and culture. For proof, check out songs like "Wang Yu," which mines the skinhead reggae obsession with martial arts (championed vigorously by Lee "Scratch" Perry back in the day) by envisioning Buddhist skinheads in China ("Some people says you find skinheads in the east of Nepal/But I man saw skinheads in the Shaolin Temple/Wang Yu, your boss is asking you/Can you do the kung-fu, Wang Yu?"); the title track ("With the Dr. Marten boots a-stomp the floor a bum bum/The found out I'm the boss, they say forever I'll last/So them rush the stage, and they started to dance/Ska music starts to play, them jump up and prance"); and the sartorially-focused follow-up to "Skinhead Moonstomp," "The Skinheads Them Crash the Moon" ("I've my shirts, my Ben Sherman shirts/When we storm into the rocket/Put on them shirt we gonna stomp all over the moon").

The Skinheads Dem a Come also features a number of sweet love songs for that special someone, including the seductive rocksteady of "Come on and Dance with Me," "My Sugar Dumpline," and the sultry "My Caravan Queen." The broken-hearted can commiserate with "I'm Gonna Knock, I'm Gonna Knock" ("Do you remember, night in September/The stars was shining for me and you/And now you tell me to go away/"I think I never see another day"), the swinging, jaunty "I Don't Want You, I Don't Need You Anymore," and Ellis' versioning of the traditional African American spiritual "Amen Amen," which becomes "Say When, Say When" ("Say when we have this fuss and fight/Say when I'm never home at night/Say when I didn't hold you tight...I give you everything you need in life/And now you want to tell me I should pay the price...").

One of the more unusual tracks is the wonderfully confessional "I was Busted" that continues the Prince Buster "Judge Dread"-type tales of running afoul of the law: "I was busted in the bar last night/I was busted because I started a fight...a hungry man is an angry man/And a flirty woman give jealous man/That's why I was busted, busted last night"). The song opens with some great spoken dialogue between the singer and a bobby ("But wea di babylon a hold me up? I didn't do nothing man! Just get your black ass up against the wall..."). There is also an urgent, driving plea for peace in "I'm Talking About Love," and what is perhaps the greatest tune on the record: the joyfully optimistic "Take It As It Comes" ("You don't need to worry about money/as long as that life is happy and funny"). The album concludes with the very Potato 5-ish "Eastern Star" instrumental.

The ska world has been particularly fortunate to have had so many first generation Jamaican artists composing superb new music and performing well into their later years--someone's got to show the kids how it's done properly, right? Mr. Symarip continues to school us all with his musical mastery.

Check out videos for "I Was Busted,""Eastern Star," and "Wang Yu" below: