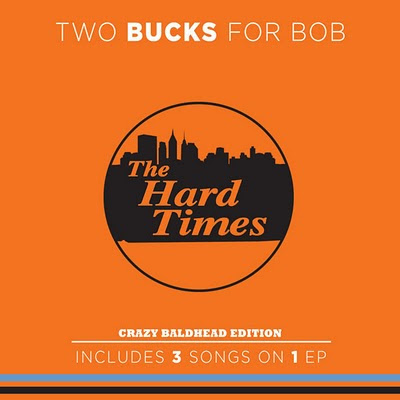 With a name that couldn't be more relevant if they tried, NYC's awesome practitioners of Upsetters-inspired boss skinhead reggae, The Hard Times, have dropped an EP of buoyant tracks to temporarily distract us from the swelling ranks of the unemployed among us and the disintegrating social safety net in tatters at our feet. The three stellar instrumental cuts you'll find on the digital-only Two Bucks for Bob EP are on par with those from other early reggae heavyweights on the scene like The Caroloregians, King Hammond, and The Bullets. Truly, this is some sweet stuff.

The high-quality of The Hard Times' songwriting and musicianship really shouldn't come as a shock when you consider the band's lineage--most of them are veterans of the NYC ska scene. Drummer Bob Timm previously was in 90s-era bands The DeFactos and Orange Street (and did a boffo job covering ska for About.com from 1997 to 2005); keyboardist Jerica Rosenblum was a member of The Scofflaws, Mephiskapheles, and The Defactos; now ex-bassist Juan Cardenas was in The Duppies; and guitarist Jacob Wake-Up used to be in Across the Aisle and is still in Hey Stranger.

"Two Bucks for Bob" (what's the story behind that title?) is a moody, reggay-ish cut that introduces you to the band's amazing chops. You might think "Bender of Steel" is a groovy mash note to that irascible, cigar-chomping, beer-chugging, fire-belching, foul-mouthed, thieving (but orphan-loving) robot from 31st century New New York, Bender Bending Rodríguez (from Futurama)--but it's actually an ode to Coney Island strongman Mighty Joe Rollino (RIP). Put "Ricochet Rocker" on the sound system and it's guaranteed to pack the dancefloor with its jerky, propulsive riddims, looping bass lines, and killer melody that's passed back and forth between the guitar and keys like a steaming hot potato. You'll be hard-pressed not to shake your booty to this cut. (Listen to samples of all of these tracks here.)

Two Bucks for Bob is a smashing debut for The Hard Times--this is exactly the kind of music we all need in our lives: tunes to help us to get through the bad times and celebrate the good.

The Duff Guide to Ska Grade: A
Posted by Steve from Moon at 9:45 PM

Email ThisBlogThis!Share to TwitterShare to FacebookShare to Pinterest
Labels: Across the Aisle, Duff Review, Hey Stranger, King Hammond, Orange Street, The Bullets, The Caroloregians, The Defactos, The Duppies, The Hard Times

I thought I'd add some A to your Q on the song titles:

"Two Bucks for Bob":
Hard Times reference, indeed. In balancing work, life, music, etc. and divvying up rehearsal costs week to week, we had a good run for a while where inevitable it always ended up with *somebody* owing me $2 after all was counted up. Usually Jake. Always good for it.

"Bender of Steel:"
Hmmm, Futurama is an interesting call, but originally it was inspired by a 20th century American icon, Mighty Joe Rollino, THE Bender of Steel. Crushed steel, ruled Coney Island till he was 104 and lost a fight with a bus:
http://www.nytimes.com/2010/01/12/nyregion/12ironman.html

Thanks for the answers! I may amend the review (since I referenced the wrong Bender!)...