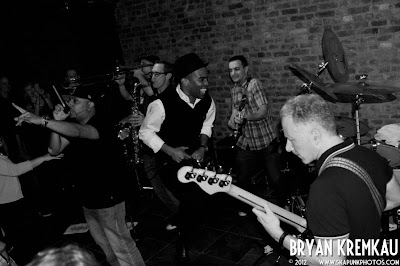 In NYC ska news, we're psyched to let you know that Bigger Thomas are prepping a set of new songs for an EP to be released digitally (and possibly on vinyl) early next year. Basic tracks will be recorded in New Jersey and then Bigger Thomas will work with Agent Jay of The Slackers on vocals, horns, and all other overdubs at his studio in Brooklyn.

The Duff Guide to Ska has been lucky enough to hear rough demos of two of these new tracks Bigger Thomas tracks--"Super Moon" and "Weird Lenses"--and is stoked to report that they're fantastic and will be sure to please fans of the band's super-charged, 2 Tone-influenced NYC ska sound.

In related news, an instrumental version of "Super Moon" will be featured on the soundtrack of the upcoming City Gardens documentary Riot On The Dancefloor (The Story of Randy Now and City Gardens), which includes interviews with Roger Apollon, Jr. and Marc Wasserman (since Bigger Thomas played this Trenton, NJ venue back in the late 80s/early 90s, along with other ska bands like The Toasters and The NY Citizens).

Here are two videos of Bigger Thomas in action, performing "Simple Man" and "Can't Remember My Name" with Roy Radics of The Rudie Crew at the recent Electric Avenue show at Characters NYC: