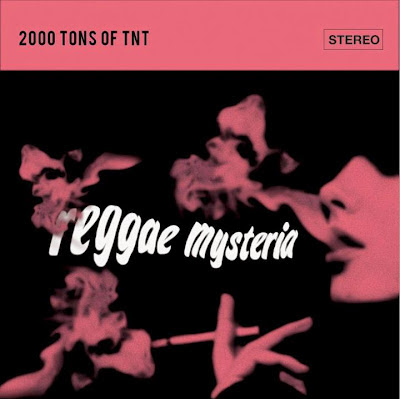 Taking their name from a G.G. All Stars skinhead reggae cut, SoCal's 2000 Tons of TNT have dropped an exceedingly smart and powerful debut--Reggae Mysteria--that mixes the soulful/funky/latin dirty reggae of The Beatdown, The Caroloregians, and The Bullets with the revved up, rough-around-the-edges garage rock of old skool bands like The Fleshtones or The Lyres.

In keeping with the spirit and form of late 60s JA and UK skinhead reggae, Reggae Mysteria contains a healthy serving of pack-the-dancefloor instrumental tracks (see "Reggae Mysteria," "Cougar Communion," or the incredible "Theme for Ambu"--someday, I'd like a tune this good written about me!), moodier set pieces ("Tiger Uppercut," "Electric Pyramid," and "Rabo de Toro" ["Oxtail Stew"]), and a series of fantastic vocal cuts that are more about evoking emotional states of mind than conveying linear stories or political points of view.

The journey depicted in "How Long Will It Take" is being undertaken either to atone for one's offenses or is an attempt to outrun their consequences--though the singer ends up feeling tortured either way: "Headed west/Need some time/to clear my head/Body breaks/Mind it sleeps/Get no rest/How long will it take before I get there?/How long will my mind know these regrets?" The loping, almost-Western reggae feel of the song conjures up Cinema-scope images of our (anti-)hero trekking through the bleak wilderness on horseback toward whatever fate has in store for him. (The tension-filled, Spanish-language track "¿Adónde Vamos?" then poses the question, "where do we go?")

"I'm Feeling Lonely" relates how people can haunt you long after they've withdrawn their love and presence from your life: "I never thought I'd know this feeling so well/Like an old friend/it listens to the stories I tell/I know you're long gone baby/I'm still under your spell..." This isn't a self-pitying song--more like the protagonist is stunned to find himself at this odd place in life (even though countless people in the past, present, and future have been/are/will be there) and even more surprised to still be wanting someone who outright abandoned them. But sometimes love is just like that--a desire/fixation on what you just can't have.

The singer in "Cleansing Sound" believes in the power of redemption through reggae and is doing his best to spread the good word like the musical equivalent of an Elmer Gantry-like, tent-revival evangelist minister: "From Phoenix down to New Orleans/Wall Street up to Aberdeen/This sound is traveling with the wind/It's coming round to cleanse your sins/It's alright now baby, just let it flow/Some people think they speak the truth/Blood and bone dagger and tooth/But I see them through their cheap facade/I'm gonna knock 'em dead like it's my job." This is performance as baptismal ritual; music as holy water; and musician as preacher traveling the land and fighting the forces of darkness, while enlightening the people and revealing the truth.

In an album crammed with excellent tracks, "Shot in the Dark" (which has nothing to do with the Henry Mancini "Pink Panther"-related soundtrack song of the same name covered by both The Scofflaws and The Skatalites) stands out as a dark gem of a song that incorporates grandiose rude boy tougher-than-tough/dreader-than-dread bravado with freaky, wild-eyed, end-of-days paranoia: "Shot in the dark/Knife in the back/Arrow in heart/Your teeth in my neck/I'm breaking the chains/A bottle of beer/Telling my people/oh, the ending is near/I can't stand it..." I keep coming back to this magnificent track, as it captures the invincibility, defiance, alienation, and bad-ass know-it-all-ness of youth like few others out there. (Derrick Morgan, you've been put on notice.)

You may not be familiar with the band, but 2000 Tons of TNT's Reggae Mysteria is an album all fans of ska and reggae should get to know--and will definitely come to treasure. Without a doubt, this one is marked for the DGTS "best of 2012 releases" category!

Email ThisBlogThis!Share to TwitterShare to FacebookShare to Pinterest
Labels: 2000 Tons of TNT, Derrick Morgan, Duff Review, G.G. All Stars, The Beatdown, The Bullets, The Caroloregians, The Scofflaws, The Skatalites

Thanks for this awesome review!!!