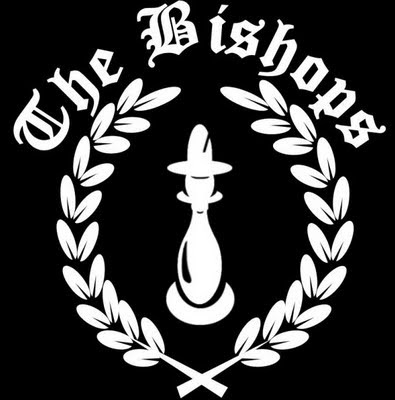 It doesn't get much more heartland USA than Omaha, Nebraska (at least in the mind of this big city, East Coaster)--but even there, Jamaican ska is alive and thriving in The Bishops. With their Skatalites-influenced trad ska sound and evocative original songs, The Bishops fall within The Scofflaws, Skavoovie and the Epitones, and Easy Big Fella spectrum of ska music.

The Bishops' self-titled, six-track EP kicks off with the stately and fantastically named instrumental "Louis Farrakhan," followed by the sweet "Front Porch"--which transports the listener to a simpler, "Andy Griffith" era (you can picture the lemonade glasses in their hands as they sit on the porch swing, dad surreptitiously keeping an eye on things from inside), as the singer courts his girl, boldly declaring, "I wanna be your man."

You can hear the something like heartache in the horns as the band looks in the rear view mirror on "Goodbye Bourbon Street." But they're not swearing off booze, as The Bishops celebrate their preferred drink of choice in "Black and Tan": "We've got a favorite concoction/that leads to intoxication..." (and I love how the slightly slurred horn lines suggest the gradual dulling of the senses with every gulp). "Gilbert Gottfried" suits its namesake well, incorporating occasionally dissonant notes in tribute to the grating former Aflac spokesman. The Bishops top off things with "Mr. Egotistical"--a Roddy Radiation-like rockabilly guitar-driven instrumental that one could imagine being written by one of the bands in the 2 Tone fold.

All and all, this is a terrific debut from a band to keep on your radar.

The Duff Guide to Ska Grade: B+
Posted by Steve from Moon at 1:05 PM

Email ThisBlogThis!Share to TwitterShare to FacebookShare to Pinterest
Labels: 2 Tone, Duff Review, Easy Big Fella, Skavoovie and the Epitones, The Bishops, The Scofflaws, The Specials