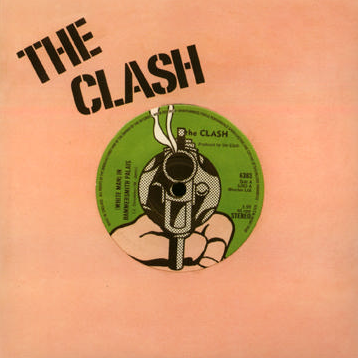 I've been very busy with work lately--and on the ska front seem to be wrestling with a bit of writer's block (the process of reviewing Maroon Town's Urban Myths has been agonizingly slow).

So, we're going to take a break from ska reviews/news to look at some videos I came across earlier today when on a break. "White Man in Hammersmith Palais" is probably one of my favorite Clash tunes (by the Only Band That Matters), partially because it helped serve as sort of a gateway drug to ska and reggae (and I've been hooked ever since...insert groan at the second cliched druggie reference)--and in how it recounts Joe Strummer's real-life experience of going to a reggae showcase (featuring Dillinger, Leroy Smart, and Delroy Wilson) with Don Letts and being kind of an outsider--one of the few white people there--but not be bothered about it. He was there for the music. Nothing else mattered.

In different stages of my life, I've been able to relate to this pursuing of one's love of music despite being different from the larger fan base (in high school, I went to several hip hop and reggae shows where I was one of the few white faces; in college and soon after, I went to ska gigs where mine was one of the few non-shaved heads; now, I'm one of a handful of hopefully-not-creepy-middle-aged guys still going to ska shows with fellow fans young enough for me to have fathered). What am I doing in these sometimes uncomfortable situations? Just like Mr. Mellor, I'm only lookin' for fun.

Below are two different versions of "White Man" separated by almost 20 years. I never caught Joe when he played with the Mescaleros (not sure why...some of those years were rough, wilderness ones for me...and the Mescaleros material never really connected, probably because I simply wanted more Clash than he could give). I really regret that I never got around to it.

The '99 version of "White Man in Hammersmith Palais" with the Mescaleros may lack the fantastic piss 'n' vinegar fury of The Clash's searing 1980 performance, but it's allowed to shine as the incredible reggae cut that it is--and always has been--at heart. (Ignore the lame-ish dancing of the weird German alt/vaguely hippy-ish crowd.)

Joe Strummer and the Mescaleros at the Bizarre Festival - Cologne, Germany - 1999

The Clash at the Capitol Theater - Passaic, New Jersey - March 1980

I've never seen this mind-blowing live video of their cover of Willie William's "Armagideon Time" (which segues into the dub "Justice Tonight"). Not many punk or new wave bands could ever hope to play reggae this well--and Topper Headon's drumming is nothing short of extraordinary. This gives me freakin' chills, it's so perfect.

Even though the end is clearly in sight, the band soldiered on at the US Festival (where they scuffled with Van Halen) in 1983...this version pales compared to the Hammersmith Odeon performance almost four years earlier--but it's still greater than most bands could ever hope to be. (No slight to Pete Howard, but you really can see how Topper's ejection from The Clash hurt them.)