New King Hammond Video: "Where Have All the Rude Boys Gone?"

King Hammond is previewing another superb track from his forthcoming Showbiz album. The video for the great 80s-inspired "Where Have All the Rude Boys Gone?" is below. Gotta love how the "Stay rude, stay rebel" refrain echoes the sentiments of a great track of the same name from early 90s German ska band No Sports!

Buster may be asking this question himself. These are photos from last Friday night's Bad Manners show in Buffalo sent in by John from Hoi Polloi Skazine, who drove from Rochester to see Fatty. (Buster looks great and trim in his leopard-print suit!) According to John, despite the poor turnout, Bad Manners put on a great show.

Can't speak for the rest of the country, but surely the Bad Manners NYC date on June 4 at Webster Hall will be better attended (already know a bunch of people who are going, including yours truly...). 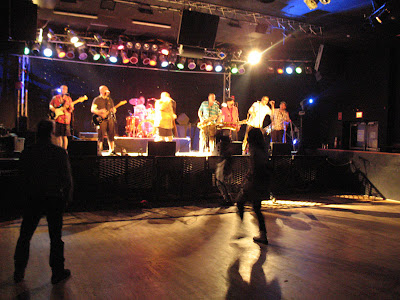 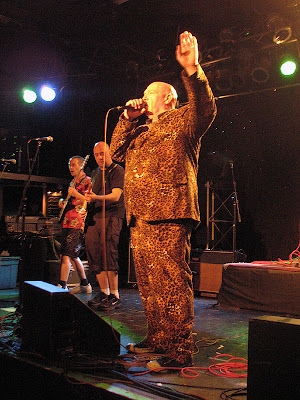 Buffalo has got to be one of the most fickle markets out there.

As for the King Hammond song - nice music - but, really? Nothing more original to sing about than that?

Been to Buffalo...definitely an unpredictable town.

Over the course of his last two albums, King Hammond has addressed issues like poverty and violence ("Cool Down Your Temper") self-serving politicians ("Mr. Easy Talk"), infidelity ("Blood Run Cold"), obesity ("Chicken and Chips"), gossip ("The Loop"), aging ("You Can't Get Those Sweet Things Anymore") with wit and humor--and he has certainly professed his deep love of reggae music (just about every other song he's written).

Not every song is going to be a "Too Much Too Young" or "Ghost Town" (i.e.: have a socially aware message). Nor should it be. Sometimes its just great to have a catchy tune to move your body and sing along to...(Madness: f$ck art, let's dance!)

Its tough to see those pictures from Buffalo. Personally I think Bad Manners might have reconsidered some of the markets they are visiting with more of an emphasis on the mid-west and all of California. There is nothing worse than driving all day in a van and playing to an empty room.