Duff Review: Deal's Gone Bad "Far from Home" b/w "These Arms of Mine" 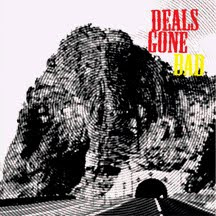 Chicago's rocksteady-soul outfit Deal's Gone Bad are back with their first new release since The Ramblers (Jump Up Records, 2007)--the slamming new Treasure Isle-goes-Motown single "Far from Home." I haven't heard a cut this inspiring--dare I say joyful--in some time. Your situation's got you lower than low? Crank this baby up on the old dansette (or iPod) and you'll find the inner strength to go on to fight another day.

As you might infer, "Far from Home" is about surviving your life's journey--figuring out how to persevere and overcome all the adversity that might befall you while you're out there on your own. Todd Hembrook sings, "You can go underneath the mountain/but don't you cross the center line/and there are other paths, so far/but beware the short way down/and don't you ever fall behind!" (or else evil, time, or your mistakes will overtake you, no doubt). Despite the myriad challenges, you should never despair, since "the Father is watching from right around the bend/you're half way home!"

The flip side finds the band in Stax territory for a terrifically urgent rocksteady reading of Otis Redding's longing (and in OR's version, almost mournful) "These Arms of Mine." Quick--somebody give Todd a hug before he bursts!

"Far from Home" will be released on May 24, 2011. The 7" vinyl single will be available through the band or via Interpunk mail order. The vinyl single is limited to 500 copies-so grab yours fast!

In addition, digital downloads can be purchased through iTunes.