Duff Review: The Delirians "Move Around" b/w "Overdub" and The Return of Steady Beat Recordings! 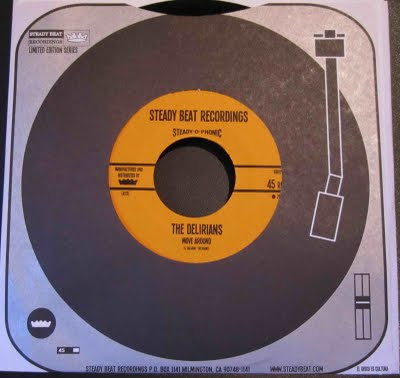 In fact, Luis was so plugged into the scene that back when I was at Moon Records and Buck and I were talking about putting together California Ska-quake, Volume 2: The Aftershock, we tapped Luis to executive produce it--and it turned out to be a phenomenally good release. Yet, despite its high-quality and Moon's promotional efforts, California Ska-quake, Vol. 2 never sold well, which left us somewhat baffled. But considering the fiercely competitive times--1996, at the height of the feeding-frenzy of the ska boom--we chalked it up to West Coast parochialism: we were seen as outsiders trespassing on the LA/Bay Area ska scene turf.

However, when you consider how much Moon had done much to spotlight the Cali scene in the early 90s with seminal releases from Dance Hall Crashers (1991), Let's Go Bowling (1991), and Hepcat (1993), as well as the first California Ska-quake (released in 1992 and featuring tracks from DHC, LGB, No Doubt, Jump with Joey, The Skeletones, Crucial DBC, Skankin' Pickle, Hepcat, The Specs, and more), this bias against Moon seemed kind of ludicrous. The label's intentions were good and pure (at heart, Buck is a socialist and was always trying to work collaboratively with other bands and labels so that all ska boats would rise together), but that's just sometimes how things go in the music business.

The Delirians' vintage ska sounds mighty good on "Move Around" (love the tinkly piano riffs!), with lyrics that (unsurprisingly) exhort one to dance: "Oh, make your move/Take your groove/Yes, we're gonna let you do your thing/Don't be afraid/or have no shame/Yeah, we'll have our fun anyway/So do The Chicken/The Mash Potato/Yeah, The Twist and The Alligator/Don't be afraid/or have no shame/Who are they to judge, anyway?" If these unrelentingly bouncy ska rhythms don't compel you to dance, you're six feet under. "Overdub," despite its title, is not a dub cut, but rather an upbeat organ-driven instrumental that's got to be a dance floor stormer live.

Duff Guide to Ska Grade: A
Posted by Steve from Moon at 6:24 PM

Just a quick note: the Blackpool recordings also had at least two 7 inch releases so technically, they weren't cassette-only.

How right you are. Thanks for keeping me honest. I will change the posting to reflect that!

I think you both have entirely too much time on your hands...

No John, I don't have enough time on my hands! Want more!