Duff Review: The Pandemics and Los Skarroneros at Electric Avenue (at Characters NYC) on 11/10/12 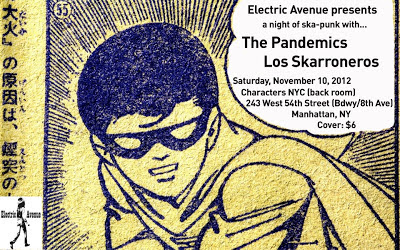 Despite having to compete with two (!) other ska/reggae shows that night (Dub is a Weapon, and The Forthrights/Frightnrs gig--both in Brooklyn), a very enthusiastic crowd of about 60-70 turned out for Electric Avenue's debut ska-punk night with The Pandemics and Los Skarroneros. Both bands were terrific; everyone had blast; and the vibe was really, really, good!

While I'm not overly familiar with either band's material (I've never seen The Pandemics before and have only caught Los Skarroneros at a show once before at The Lake), they both served up extremely high energy performances that had the audience up on their feet and dancing for both sets (dorky EA fact: Los Skarroneros' set actually inspired our first Electric Avenue mosh pit to form).

I usually have loads of video for Duff Guide to Ska readers to view, but just before I left to set up my DJ equipment at Characters NYC, I discovered that my Flip video camera was busted (the little metal knob that provides a connection to and holds the battery in place was gone--it must have come off when I dropped the Flip a few weeks ago...anyone out there good at soldering?). However, I did tape one song from each band on my phone to give you a taste of the bands and the night.

The Pandemics' excellent set--which ranged from vintage ska to ska-jazz to modern ska to ska-punk--was comprised mostly of songs from their great new-ish album, Brain on Tap (which can be sampled/bought here on Bandcamp). I particularly dug their trad and modern ska songs, including "Skaramanga," "One Night Stand," "Movin'," and "Separate Parts" (the last two you'd swear were Toasters songs)--and they also threw in two very choice covers: Byron Lee's/Keith Lyn's/Ken Lazarus' "Jamaica Ska" and John Lennon's/Paul McCartney's "I Saw Her Standing There."

Since my Spanish is poor to non-existent, I can't tell you much about Los Skaronneros were singing about--but their slightly ragged ska-punk songs were passionate and (from what I was told) political, and really pumped everyone up. The track I recorded below, "Cananea 1906," is about a strike at the Cananea Consolidated Copper Company, where the Mexican miners demanded equal pay/treatment with their American counterparts. The U.S.-owned company sent American vigilantes to confront the Mexican workers and ended up shooting and killing dozens of miners--which outraged people across Mexico and helped spark the Mexican Revolution of 1910.

After Los Skarroneros' set, most people hung around for a few more hours--drinking and talking while I spun ska and reggae vinyl and CDs. Twice, Chris Malone of The Pandemics approached me to confirm the names of the tracks I was playing: "Swinging Like Tiger Woods" by The Porkers and "Kicking Pigeons" by Spunge. Someone else then asked about the Planet Smashers' "All Men Fear Women"--though the track that seemed to move the crowd the most was Prince Fatty's incredible new production of John Holt's "Ali Baba," featuring Winston Francis and Dennis Alcapone.

We plan to have both bands back sometime in 2013, so you'll have a chance to check them out/see them again--something you definitely should make a point to do.
Posted by Steve from Moon at 10:26 PM

Agreed on all accounts! Was a great show!!!