Across the Aisle to Appear on Checkerboard Kids TV Show

This week, Across the Aisle are filming a segment for Checkerboard Kids, a long-running, ska-influenced, public access cable variety show, hosted by Phil Esquire and The Masked Mutant. (In NYC, this show may be seen on cable--generally every other Tuesday night at midnight, but visit the Checkerboard Kids site for times and channels--if you are outside of the five boroughs, you can watch it at its broadcast time over the internet at www.mnn.org.) I dropped Phil a line to find out when the ATA show will air and will pass that info along to The Duff Guide to Ska readers when I receive it. (Phil?)

Phil Esquire (and his trademark, gravity-defying poof of hair) has been a mainstay of the NYC ska scene for years--he graciously aired and promoted the ska videos we sent his way in my Moon days--and he continues to showcase many a great ska act on his program. Plus, he has great respect and admiration for Laurel "The Godfather of Ska" Aitken (there is a even a picture of Phil with Laurel taken, I believe, at the in-store I set up at the Moon shop back in '97 or so), which makes him more than okay in my book.

Here is the Checkerboard Kids promo to give you some flava...

In other ATA news, the band is currently recording new tracks for a new release. The band's next gig is with The New York Ska Jazz Ensemble, Hey Stranger, and the Duppies at The Trash Bar in Williamsburg on October 12. See flyer below for details... 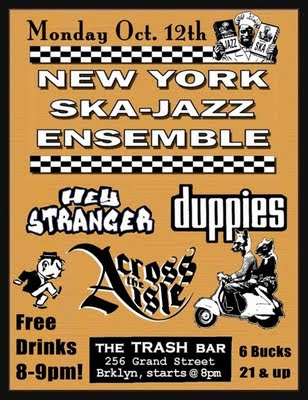 I heard a rough mix of the Across the Aisle cd in the works and its pretty good. definitely a band to keep an eye on.

i also went to a filming of the checkerboard kids last year when phil had One Night Band record a 20 minute live set for the show, and he was one of the nicest guys ive ever met.

Can't wait to hear the new ATA album. Thanks for the preview.

And you're completely right about Phil being a great guy. Perhaps a bit quirky, but really genuinely nice.

Aw shucks! Thanks for the love guys! Across The Aisle's episode will be airing on MNN Time Warner Cable Channel 34 in NYC on Midnight Tuesday night/ Weds Morning Oct 28th viewable live around the world streaming on http://mnn.org Here's an exclusive clip that won't appear on the episode! http://www.youtube.com/watch?v=GLjl6UZ6Zp4 I also am looking forward to ATAs album, their stuff is great! While I'm plugging I've also got an upcoming episode with The Duppies too: http://www.youtube.com/watch?v=p4sMlKbx_XM

Thanks for the update, Phil!