From the Duff Archives: The NY Citizens' On The Move Review

The article below comes from the very depths of The Duff Guide to Ska's archives. This past weekend, I stopped off very briefly at my parents' house in Yonkers and managed to rifle through one of my old storage bins that contains all sorts of bits of pieces of my life. Happily, I was finally able to dig out a review of The NY Citizens' On the Move LP that I had written in my senior year at college, which was published in the March 23, 1989 issue of Fordham University's College at Lincoln Center's student paper, The Observer. (I had written about this review previously, but hadn't been able to locate my copy of this issue until now.)

Apart from a few cringe-worthy passages at the beginning, I'm relieved to find that it's a pretty decent piece of writing--if I don't say so myself. Just to give you a few points of reference, The Coliseum was the local dive (58th Street, right off Eighth Avenue--the Apple Bank that used to be across the avenue had an ATM that gave out cash in increments of $5.00, which was pretty convenient when you didn't have that much to begin with, but still needed to contribute something toward the next pitcher of beer) that the theater majors, arty-types, and freaks hung out in, where they served cheap, diluted Rolling Rock; never checked IDs; had a latrine in back that masqueraded as a bathroom; and during the week always threw us out soon after midnight, as the barkeep had a long subway and bus ride home (to Yonkers!)--you could tell when he was done for the night because he'd mutter under his breath, just loud enough for you to hear as you walked away after purchasing your tenth pitcher of beer, "Get the fock outta my bar!" Also, The Toasters album about to be released was Thrill Me Up, while Bim's was Tuba City (both on Skaloid Records).

(I also found the ticket stub from the Toasters/Bim/NYCs show at The Ritz referred to in the review!).

Click on the image to enlarge it for reading... 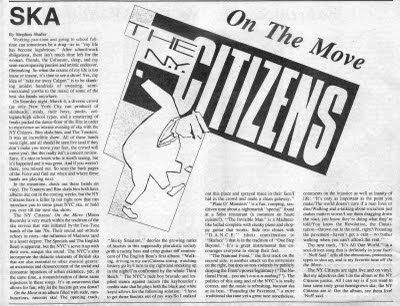