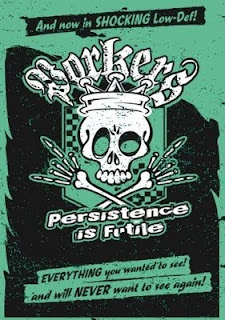 I had a great time this past Friday night downing a few pints and catching up with Pete Cooper of The Porkers, who was in town on holiday with his lovely fiancee (by now they have been married up in Niagara Falls--congrats Pete and Haley!). Pete and I hadn't seen each other since just before I left Moon Records in '99 (and The Porkers were about to head off on the Warped Tour that year), so there was a lot of ground to cover...

While The Porkers have been a bit of a break this year, they are doing two dates in their native Australia (Sydney and Newcastle) this November and will soon be releasing "Persistence is Futile," a live DVD (containing 15 Porkers clips plus extras, including a 1988 Pork Hunts documentary), which can be purchased from Sound System Music. The band's most recent album, This is the Porkers (The Duff Guide to Ska review may be read here), is very much worth picking up (Pete thinks it's their best studio recording yet).

And Pete and Haley report that The Specials, who toured Australia and New Zealand this past summer, were incredible (though they missed Dammers being part of the show).
Posted by Steve from Moon at 6:14 PM

Damn Pete was up in NYC? I wish the Porkers would come back to tour again here but guess scene wasn't what it used to be.

Pete loves the USA...he'll figure a way to get The Porkers back over here at some point down the line...