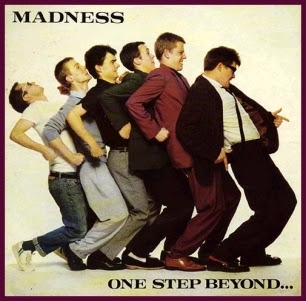 From the Madness Central fan site:

One Step Beyond Re-Issue Tracklisting And News
We are now able to bring you exciting news of the One Step Beyond album re-issue due for release on 26th October 2009. This has been a subject of much conversation round the Madniverse with speculation as to any likely “extras” that might be included and formats etc. Well wonder no longer and just….errr…wonder in awe at the feast that has been prepared. 2 CD’s, 33 audio tracks, 5 video tracks, booklet notes from Irvine Welsh and much more:

It has a 3 part card gate-fold-out packing, original album artwork on cover and on 3 panels inside sleeve.

There is a Circle M design on sleeve and number 1 on spine to line up with forthcoming albums presumably Absolutely will be (2).

Holy crap! This looks like it's gonna be an extraordinary re-issue (it even has the live tracks that had to be cut from the Dance Craze soundtrack)--they're setting the bar mighty high with this one!
Posted by Steve from Moon at 7:27 AM

I'll be getting it day one, however I think the tracklist is a little disappointing. All those tracks have released before, most of them on CD even.

i cant wait to get this. this will be my third time buying one step beyond and absolutely, and second time for the rest of them.

however, i feel like theres a glaring oversight in not including their first single on here, seeing as how the two tone versions of Madness and The Prince are different then the album versions and i feel like theres not a copyright issue since the dance craze songs are on there.

im psyched for the peel session and the b-sides though. itll be nice to finally have the b sides on CD since i never got the bsides box set for many reasons, including lack of money and those annoying interview clips tacked on to the ends and beginnings of songs.

Yeah, I was just trying to listen to "The Business" box set and had forgotten about those sound clips. It is a great collection of songs, but completely ruined by the mini interviews.

I was freakin' 13 in the fall of 1979. Even though I was a fairly clueless lad, I was aware of punk rock (and remember being very amused that a band was calling themselves the Sex Pistols, which I interpreted as a double-entendre for The Penises!) and was becoming a huge fan of new wave (B-52s, Devo, Blondie, Ramones)--but hadn't really discovered 2 Tone yet (that would take another year or two).