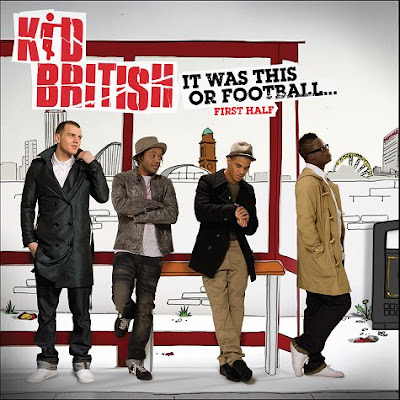 One shouldn't be cowed by the ska purists who will no doubt scoff and snort derisively at the likes of a band like Kid British--a major label, multi-racial Britpop-ska act--since you'll be missing out on some excellent music from a band with the chops and backing (some of Football's cuts were produced by Stephen Street, who has previously worked with a few acts you might have heard of like fellow Mancunians The Smiths, as well as Blur, and Kaiser Chiefs) to keep legitimately good ska music on the radar of the music industry, press, and fans alike. (While we can endlessly debate the merits of keeping ska music underground after the hijacking of the US ska scene in the 90s by the majors, it still takes money, fans, and hype to keep a scene going, whether it's mainstream or not--so when a major label supports a better-than-decent band making "authentic" ska music, respect and support are due.)

For those keeping score, of the seven tracks on It Was This or Football...(First Half)--the second half of the album is being released this fall (why split the album in two--maybe they hope for twice as many opportunities for the release to be reviewed?)--Kid British serve up three flat-out ska songs ("Elizabeth," "Part-Time Job/Shirt & Tie," and "Cosmopolitan"); a ragga bonus cut about (what else?) footie and Manchester United; generously sample Madness' "Our House" on the awesomely addictive "Our House is Dadless" (okay, the original wasn't a ska song--but that band obviously has a major ska pedigree); which leaves us with two catchy Blur/Kaiser Chiefs-y songs: "She Will Leave" and "Reaction" (which makes this musical Anglophile happy).

Taking a page from The Specials' playbook, Kid British don't hammer you over the head with overt "message" songs, but sing about topics everyone can easily relate to (family, money, relationships between the sexes, jobs, and sports) and slip the social commentary in the subtext. Casual listeners might mistake the ska-romp "Elizabeth" as a conflicted love song to a woman--which in a way it is: the Elizabeth referred to is the royal one depicted on the British pound ("At the end of the month you always disappear/When I get paid somehow you reappear/My mates love it when you're out on the town/'Cos you're the one who always gets in the first round"). "Our House is Dadless" is a smart, funny, Doc Marten's-on-the-ground, 21st century update on Madness' nostalgic take on the (stereo)typical working-class household ("And every one of our houses are dadless/So no wonder our houses are Madness"). The Catch-22 (referring to the book and phrase, not the band) desperation of "Part-time Job/Shirt & Tie" ("I got to get a part-time job/I really need to make this music/but look at all the bills I got/I need help just to see me through this") isn't just for musicians trying to figure out how to pay the rent while pursuing their musical vision, but is for all clockwatchers out there in soul-deadning jobs, seeing their time, energy, and spirit robbed from the pursuit of their vocation.

Perhaps the best song on this half-album is the gorgeously lush "Cosmopolitan," which manages to embody the thrilling experience of being young, single, and on the make with the day ahead of you ripe with possibilities for finding a new girlfriend ("There's a warm summer's breeze, not a cloud in the sky/You put your worries on hold when the sun shines/And the girls are outside reading Cosmopolitan/And the boys are outside, and you know they're watching them..."). Pure ska-pop for rude people.

Can't wait to see what the "second half" brings...

Thanks for understanding us when many other journalists do not. I hope you can review or new material with the same open mind as you did on the old. Thanks again and happy new year.. heres to booze, birds and bills ( In that order) Simeon ( KiD BRiTiSH)

Can't wait to hear the new material from Kid British!

Thanks for stopping by and leaving your comments!