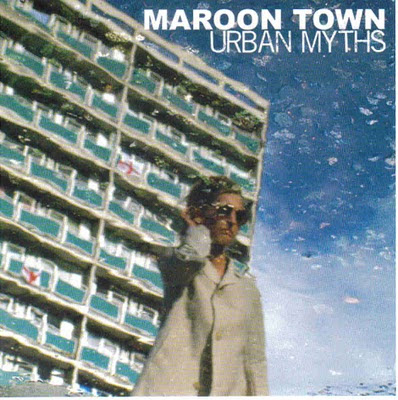 If they haven't ever been on your radar, you should know that Maroon Town's genesis was in the late 80s UK ska scene that spawned the likes of The Trojans, Potato 5, and The Loafers--and rejuvenated the careers of Bad Manners and Laurel Aitken. What made Maroon Town unique was their mix of vintage ska, reggae, hip hop and soul (with socially conscious lyrics often from the perspective of the common person), as exemplified on 80s/90s hits like the cover of Prince Buster's "City Riot," "Pound to the Dollar," "Prince of Peace," and "Average Man" (several of which were produced by The Specials' John Bradbury). While Maroon Town (the core of which is Deuan German and Rajan Datar) has been active on and off over the past 20 years--often collaborating with a rotating cast of musicians from all over the globe--Urban Myths is their first album since 1997's Don Drummond. And even though about half of the songs on this album are new versions of old songs or have previously appeared on other Maroon Town records, this is still a powerful and compelling return to action.

On Urban Myths, Maroon Town successfully ventures into such non-ska genres as salsa ("Latin Moshpit"), jazz (a groovy reading of Herbie Hancock's perennial "Watermelon Man," which appeared on New Dimensions), and soul ("Innocent Mind" and "Clarendon Calling," with the fantastic Jenny Stanford on vocals; both of these songs appeared in different versions on Don Drummond)--but it's the ska and reggae tracks that play to the band's greatest strengths and catch them at their most appealing.

"Ya Ya (Lemme Tell Dem)," with its immensely catchy sing-along chorus, is a hard-driving, raucous ska cut about hitting the town (MC Sirreal toasts, "I got up in the morning and went to the bar/When I came out all I saw was the stars"), acting up, coming on to, and mouthing off to anyone within striking distance. While there's gonna be hell to pay--not to mention one hell of a hangover--the sound and heat generated makes it all worth it. It's then quite a contrast from the yobbish chorus of the ugly 24-hour bender to the lush and polished ska-pop of "Lion" (which even includes the sounds of plucking violin strings), though its sheen can't mask the something's-gotta-give desperation (and, ultimately, the hope) in its lyrics. Andrew Tumi sings, "I'm tired of feeling gray/How I pray it'll go away/Saving happiness for rainy days/One life and the price you'll pay/Can't keep it up this way/My deep heart's in a shallow grave/Once it's full, it's all you got/Cause something's not right and I gotta move on...I want to run like a lion in the sun..."

You'll long for a lyrics sheet when you hear "Wreckless"--the pace of the rapping by The Wreckless Crew is so freakin' frenetic and urgent that you can barely make out every other word (it still sounds great, though). "Bella Cosa" ("beautiful thing") is Latin-tinged roots reggae with excellent LKJ-like toasting by Rubi Dan; the encouraging chorus urges us to hang on and "realize, realize/hope is just a shot away." "Bullit," perhaps inspired by the Steve McQueen film of the same name (which is actually spelled "Bullitt") is an crisp Skatalites-flavored instrumental (though it's considerably less revved up than that film's car chase through the streets of San Francisco).

The seductive "Are You Ready" (which also appeared on the Don Drummond album) wants to lure the listener on a mystical musical journey. The superb Mikey Roots toasts: "All generation love the musical spring/The African man a instruct you again/In a traditional style for real a god send/Vibes to conquer duppy vibes to make us boom beng/Rootical flavor well and nice and ting/Crowd a people just a bubble crowd a people just a sing/No say them love the old school feeling/Cause the people bawl yes every time a sing a sing/Are you ready?/Tell me are you ready?/Are you ready?/Then follow me now!" After hearing this, there won't be any question in your mind about what you're gonna do.

Die hard Maroon Towners may be a bit put off that there's only an EP's worth of new material on Urban Myths after so long a wait, but the new stuff is stellar--and the album serves as a terrific primer on the band for newcomers.

They were great at the London Ska Festival. They were the first act of the fest, at like 7pm on thursday so their set was relatively lightly attended, but it was awesome.

Wish I had been there to see them! Thanks for your feedback.