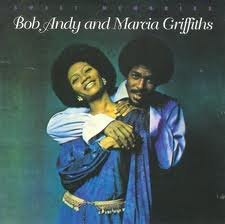 It just keeps on getting better:

Following the announcement of Ken Boothe, we are honoured to announce the next acts added to The London International Ska Festival are two more Jamaican legends. One of reggae's most influential songwriters and singers, Bob Andy and the 'Queen of Reggae' Marcia Griffiths will be reuniting for a very special evening, and once again performing together again as Bob & Marcia.

The duo met whilst recording for Jamaica's premier label of the day Studio One, but it was on the move to the Harry J Label that their international recognition came. In 1970 and 71 they hit the British, as well as the International charts with their version of Nina Simone's 'Young, Gifted and Black', which peaked at No.5 and 'The Pied Piper' (reaching No.11).

Bob Andy was one of the founding members of The Paragons, along with Tyrone Evans and Howard Barrett, and later joined by John Holt. As one of Studio One's leading lights, Bob worked closely with Jackie Mittoo on many of the label's seminal sounds. Besides writing songs for himself which have become reggae standards 'Feeling Soul', 'My Time', 'Going Home' and 'Too Experienced', to name just a few, Bob contributed hits for many of the other artists there. His album 'Songbook' is quite rightly referred to as "a masterpiece".

Marcia Griffiths, discovered by Philip “Boasie” James lead singer of the Blues Busters, started her singing career performing with Byron Lee & The Dragonaires. Her recording years started soon after, at Coxsone Dodd's Studio One where she recorded her first hit, the Bob Andy composition 'Feel Like Jumping'. Upon Bob & Marcia's split in 1974, Marcia united with Judy Mowatt and Rita Marley to form the I-Threes, Bob Marley's sublime vocal trio.

For over 40 years Bob Andy and Marcia Griffiths have continued to record and tour all over the world, establishing themselves as true legends of Jamaica’s musical history. In recent years the Jamaican government conferred the Order of Distinction on both of them. We are delighted to have Bob and Marcia performing not only their timeless duets but also their classic solo hits at The London Intl Ska Festival.

Also, the schedule of appearances is starting to firm up:

Friday 22 April 2011
The Loafers and Hotknives