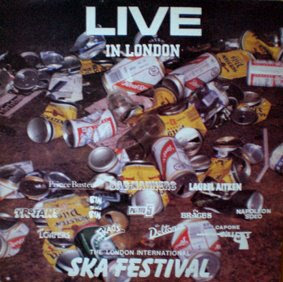 With the forthcoming 2011 London International Ska Festival in mind, I thought it might be timely to turn back the clock about 23 years to check out Live in London, the record that documented the very first ska fest Sean Flowerdew organized back in 1988, when he was still a teenager (seventeen, to be exact!).

Apart from the 1988 Bad Manners fan-club only Eat the Beat LP, Live in London was the auspicious debut commercial release from Buster Bloodvessel's then newly revived Blue Beat Records--he licensed the name and logo, and then proceeded to issue a string of top-notch records, including Bad Manners' Return of the Ugly, Buster's All-Stars' Skinhead Luv-A-Fair, and Napoleon Solo's Shot! before the label folded in 1990. As an historic recording, Live in London captured 12 phenomenal bands (with lots of spirited noise and chanting from the crowd) at the height of the late 80s Euro ska scene (England, in particular, was a hotbed of post-2 Tone activity); and as for its merits as a ska record, you'll be hard-pressed to find a collection of tunes and live performances as consistently good as this.

Night one, December 20, 1988 at The Sir George Robey (an elegant name for a shambles of a venue), featured Capone and the Bullets (UK), The Braces (West Germany--this was before the fall of the Berlin Wall!), Bim Skala Bim (USA), Skaos (West Germany), and Prince Buster (JA) backed by The Trojans (UK). Night two, December 21, 1988 at the larger and more glam Brixton Fridge, included Napoleon Solo (Denmark), The Deltones (UK), The Loafers (UK), The Potato 5 (UK), Laurel Aitken (UK), and Bad Manners (UK).

Glasgow's Capone and the Bullets open side one with their light-hearted "Paranoid Zone," offering up a great example of why they were wildly popular throughout the British Isles (as an intro to this tune, the singer deadpans that he gets paranoid "whenever we do a gig, I get this sort of feeling that everyone is looking at me"). The Braces' demonstrate why they were one of the top German acts at the time with a boisterous rendition of their signature tune "Julie Julie". On every live recording I've ever heard them do, Boston's Bim Skala Bim always sound incredible--they were simply a powerhouse live act, a key ingredient of which was the fantastic vocal interplay between Dan Vitale and Jackie Starr (certainly rivaling the spot-on vocal stylings of a Recriminations-era Bucket and Vicky Rose). "Jah Laundromat" is Bim's amusingly surreal take on Rastafarianism immersed in Christian baptism ("We'll wash all our sins away/down at Jah laundromat today"). Skaos exhumes and re-animates an appropriately sinister, revved-up ska-billy version of "The Munsters" TV theme song (with a nice thermin-sounding guitar effect)--and, like several other songs during the 80s (such as "Baby Elephant Walk"), it was covered by more than one ska band: The Forest Hillbillies recorded it for Gaz in 1986, swapping out the guitar for a violin on the melody for a touch of that hoedown-ska sound.

If happen to come across a vinyl copy of this album, check out the significant number of vinyl grooves allotted to Prince Buster's "Dance Cleopatra" (it's practically a third of side one!). While I have major respect for The Prince--and The Trojans are truly nothing short of stellar as his backing band here--this strikes me a 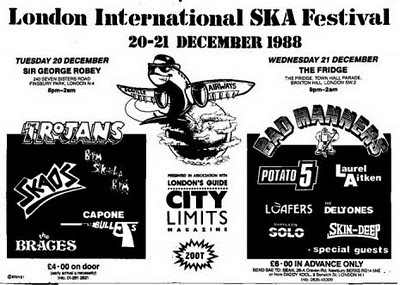 bit of an odd choice for showcasing Buster's talents. As The Trojans perform a deadly cool extended take on this instrumental cut, Prince Buster spends most of the track shouting out the titles of his hit songs or signature lyrics like "Al Capone's guns don't argue!" and "This is a punch designed by Cassius Clay to cripple every fighter living today!" A minor quibble, but it would have been nice to actually hear him sing a tune like "Take it Easy" or "Shaking Up Orange Street."

On side two, Napoleon Solo practically burst out of the speakers on their burningly lusty and almost cinematic soul-ska romp, "Drive Me Wild" ("It's kind of strange what a woman can do to a man/Break me down and build me up now/Don't you understand?/She drives me wild!"). Criminally unknown in the States (imagine a 60s girl group like The Angels or Ronnettes transported to JA to exclusively perform ska and rocksteady tunes), The Deltones' breezy warning "Don't Fall in Love" (...with me) wasn't enough to keep the UK rude boys away (and this sweet cut lets you know why). Sean Flowerdew's own much beloved band The Loafers turn in a blistering performance of their frantic "Too Late Rudy". The premier instrumental ska act in the UK of that time, The Potato 5 play a rollicking cover of The Skatalites' foundational rhythm track "Shockers Rock" (which in itself is a version of Roland Alphonso's "Cleopatra"). Laurel Aitken, one of the most natural and gifted performers I've ever seen, is backed by the Pressure Tenants on this jaunty reading of his 1980 hit "Rudi Got Married." While they were poised to release Return of the Ugly, one of the finest records of their career (largely due to the superb songwriting of King Hammond himself, Nick Welsh), Bad Manners relive the glory days with their sanguine 1981 top 10 hit "Walking in the Sunshine".

Back in the day, the readers of George Marshall's amazing "Zoot" skazine (he's written some of the most accurately succinct ska reviews I've ever had the pleasure to read) voted the London International Ska Fest the #1 ska event of 1988--and Live in London as the #2 live record in 1989. How's that for an endorsement? (George also provides boosterish liner notes on the back of the LP sleeve.)

No doubt there are pirated copies of Live in London orbiting in cyberspace, but of the many out-of-print treasures from the late 80s ska scene deserving a proper "real world" re-release, this is an absolute must.

Duff Guide to Ska Grade: A
Posted by Steve from Moon at 1:20 PM