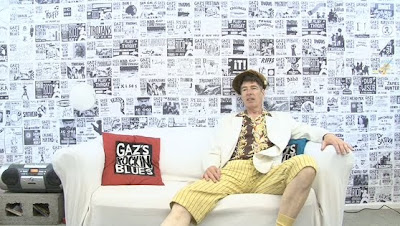 Directors Leo Leigh and Zaid Mudhaffer have put together an excellent short documentary film (17+ minutes) for Spine Television about Gaz Mayall's long-running club night titled "Gaz's Rockin' Blues: A Brief History." Filmed during the release of Gaz's book, "Gaz's Rockin' Blues: The First 30 Years" (read The Duff Guide to Ska review here) and an exhibit of his club posters and related paraphernalia at London's Subway Gallery, this doc features interviews with Gaz, one of his main DJs Natty Bo (Top Cats, Ska Cubano), and assorted friends and fans. (An added bonus is a soundtrack featuring cuts from The Ska Flames and Potato 5!)

So much of what Gaz has done and accomplished with his club night is ephemeral (people came, drank, danced, socialized, fell in/out of love, caught a band, went home--then, repeat a week later) that it's really wonderful that at least some facets of it have been documented in his book--and now in this gem of a film.

Great doc. I have always wanted to visit Gaz's Rockin Blues. Not really feeling the delusional photographer at the end though who rambles on and on about how electric music killed music and it is dead today? He needs to open his ears.

Thanks, Matt. I appreciate the comments!

I've always loved the Trojans and the whole late 80s UK ska scene outside of the 2Tone bands. I gotta get my hands on that book too!
That looks pretty close to how the Moon / Toasters book should go! Just shit tons of pictures and such.
That subway gallery was really cool. That's a great idea too. Reconstitute old unused spaces and put some art in them!

Thanks, Jeremy! Gaz's book is fantastic--definitely worth tracking down (I actually ordered it through Amazon in the US). It would have been amazing to have been in the UK in the late 80s...so many good bands and so many good releases...